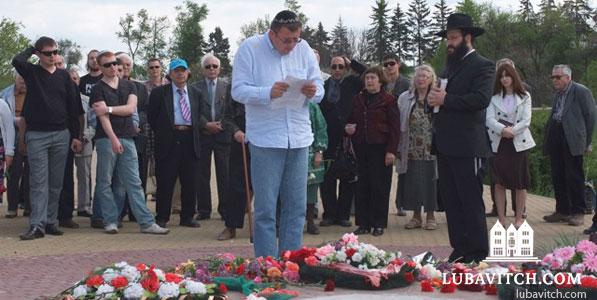 All News
Go to Photo Gallery

(lubavitch.com) The Jewish community of Rostov working in partnership with the city’s Chabad Rabbi, Chaim Danzinger have launched a project to establish a permanent memorial to 27,000 Jews and civilians murdered at Zmievskaya Balka 68 years ago.

The project, sponsored by Mr. Yuri Dombrovsky, a Moscow-based businessman, seeks to collect  names and specific information about the men, women and children rounded up for death here on August 11-12, 1942.  A website, www.rememberingrostov.com was set up where survivors and family members can share information.

On August 11-12, 1942, German soldiers herded 27,000 residents of Rostov – most of them Jewish citizens – to a secluded area at the edge of the city, where they were summarily executed.

It was the largest massacre of innocent civilians in Russia, and yet, until recently, information about it remained buried among the horrors of the Holocaust.

Mr. Yevgeni Mavshovitch, 79, whose family escaped just before the Nazis entered the city, has already collected the names of 2500 Jewish victims massacred here. Most of the names collected thus far have been culled from government archives, but those involved in the project say they hope that survivors living all over the world will come forth with more information.

“The largest genocide of Jewish people in Russia took place right here. It is our responsibility that their memory be kept alive forever,” says Yevgeni.

Some family members of survivors live in the area. Daniel Popov, a 21 year old student living in Rostov-on-Don, participated at a memorial event last month, standing contemplatively on the same spot where 68 years ago, his grandmother’s family was murdered.

But today, relatives of victims and survivors are all over the world. Rabbi Danzinger, who sees momentum for the project growing, hopes readers will pass the word along. “There is an urgent need to gather names, stories, and historical information while we still have an opportunity to hear about it from survivors of the war and the relatives of those killed at  Zmievskaya Balka. We want to hear from anyone with information about victims or survivors, and we urge them to contact us through www.rememberingrostov.com.”