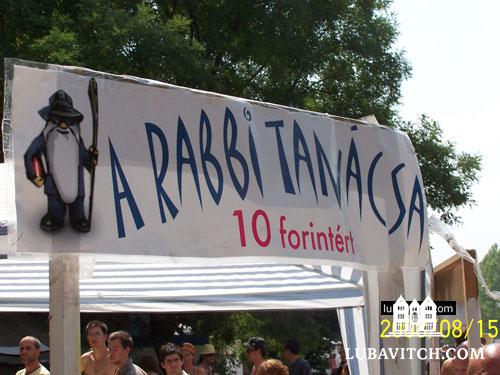 (lubavitch.com) For twelve years, fans have paused in their rock, punk, and reggae binge at one of Europe’s largest summer music festivals and lined up at the Zsido Sator, the Jewish tent, to ask a rabbi a question. This was the first year, however, that the crowds came to hear the rabbi rock the house.

In what has become something of a Sziget Festival tradition, a motley crew of tattooed, pierced, dread locked, slicked back music lovers, teens to aging boomers, stopped to ask the Rabbi of Hungary's Chabad-Lubavitch community, Rabbi Boruch Oberlander questions at the weeklong festival on Obudai Island in Budapest. And this year, Lubavitch of Hungary’s rabbi of its Israeli community, Rabbi Shmuel Raskin, got hundreds grooving – men on one side, women on the other – to Jewish tunes until midnight was a memory.

Putting a rabbi before a mike, placing a rabbi in midst of festival goers is all part of Lubavitch of Hungary’s modus operandi to reach Jewish people wherever they are—on an island, in medical school or in preschool.

Questions posed to Rabbi Oberlander and his assistants from the Chabad yeshiva in Budapest are way heavier than one would expect from a person camping out in a tent to be as one with trance, pop, or jazz in the August heat.

In the “open spirit of the festival, people sit and talk about things candidly in a way they would never do off the street,” Rabbi Oberlander said.

But some have taken years to mull over their questions.

A clean cut thirty something reaches the tent at noon. “Rabbi, I’ve been walking past the Jewish tent for years. Now I finally had the courage to sit and ask you.”

The line lengthens in the afternoon as concert goers seek to rest their ears from the music and unburden their souls in Sziget’s Civil City, a warren of tents and booths occupied by political groups, pottery makers, chess lovers and religious organizations.

“Can you prove to me that there is a Creator?”

“Come on Rabbi, do you believe the story of Jonah is literally true?”

“It’s been seven years. How can I get over my divorce?”

As the sun sets, a woman – her sneakers and jeans caked in Sziget’s ever present mud – slides onto the bench in front of the Jewish Tent. “I just found out that my grandmother on my mother’s side is Jewish, and I have been reading everything I can find on the Holocaust. What else should I do?”

“Judaism is not only about getting burned in crematoria, there is life to it,” Rabbi Oberlander begins.
Hungarians discovering Jewish roots and coming to Chabad for explanation is a common occurrence. The majority of the country’s Jews were slaughtered in the Holocaust – some 600,000 according to estimates.

A disquieting legacy of the Holocaust, a member of a nationalist, neo-Nazi group, arrives at the tent sometime later.

He’s come to challenge Rabbi Oberlander’s beliefs. “Auschwitz was not a death camp. It was a labor camp,” he says.

The skinhead picked his Holocaust denial fight with the wrong guy. Nazis murdered members of Rabbi Oberlander’s family. “If so, tell me where my grandmother went. Did she just get lost?”
Such encounters are rare, but important. “As important as it is for us to speak with Jewish people, it’s very important to talk with non-Jews. The young people should see us as normal people and get answers to their questions,” Rabbi Oberlander said.

This fall, students at Semmelweis University’s medical school will receive college credit when they probe for answers at Lubavitch of Hungary’s course on Jewish medical ethics. Nearly 600 Israeli students pursue medical degrees at Semmelweis. The class for future healers follows on the heels of the accredited Jewish legal ethics course Rabbi Oberlander has taught for several years at ELTE, Budapest University Law School.

Also in September, young students, ages three to seven, will have a newly renovated building to look forward to when they return to the Lubavitch preschool. Over the summer, workers have been yanking out walls and replacing mustard colored floor tiles to provide a more open, welcoming space for the seventy students.  Housed in a school built for the children of communist party higher ups, the ten year-old school bore all the signs of short cut construction of that era – metal bathrooms, neon orange metal windows and doors.

As Hungarian parents upgrade their lifestyle and modernize their living space, “they are not going to send their children to a school that looks like it came from fifty years ago,” said Bat Sheva Oberlander, director of the preschool.  Natural wooden tables, carpeted play areas, trendy colorful tile floors will be more pleasant for the children, and more attractive to prospective parents, Mrs. Oberlander said.

The festival closed for the season on August 18, but Chabad has made an impression, prompting one blogger at szighet.hu to write: “I had a blast at the Jewish tent. I highly recommend pitching your tent next to the Jewish tent.”