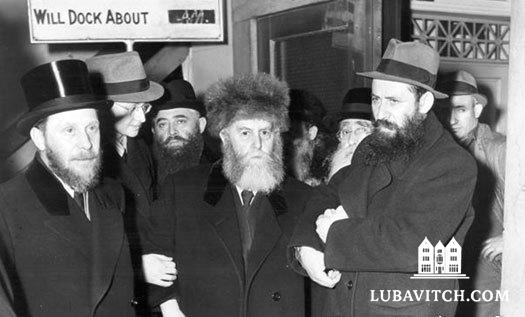 A news release dated March 1965 commemorating the 25th anniversary of the previous Lubavitcher Rebbe’s arrival to the United States:

“The following article is in commemoration of the 25th anniversary of the arrival of the late Lubavitcher Rebbe, Rabbi Joseph Isaac Schneersohn to the United States, 1940-1965, which will be marked on the 9th day of Adar Sheni, this year on Saturday, March 13.

It was a typically brisk windswept March morning, that Tuesday back in 1940, which saw a crowd of several thousand at New York’s pier 97, gathered there to witness what was to be one of the finest hours in Judeo-American history.

The Drottingholm, a Swedish liner, had just weighed anchor and its passengers prepared to disembark. New York City police suggested that the distinguished passenger whom the assembled had come to greet, the Lubavitcher Rebbe, Rabbi Joseph Isaac Schneersohn, the great sage and hero who narrowly escaped the European onslaught, be the first to go ashore, to avoid unnecessary confusion on the part of the surging crowd.

Even the transatlantic voyage of the celebrated Chassidic leader was, as his life story, stormy and eventful. North Atlantic waters were infested with U boats; no one was at any time certain that the ship would ever reach its destination. No less than four times was the Drottingholm stopped on the high seas by warships of various countries who wanted to assure themselves of its neutrality and search for military cargo. In fact, the liner was the last commercial transport to cross the Atlantic prior to the shipping ban of World War II.

But the Rebbe had finally made it and his long awaited arrival to the shores of America had become a reality. Here he stood surrounded by the official reception party which had gone out to sea aboard a special boat to greet him as the Drottingholm approached the harbor.

As he made his way to a special platform set up on the pier for his reception, a resounding but grateful “Sholom Aleichem” rocked the pier.

The reception was brief. The Rebbe addressed the gracious crowd and acknowledged the presence of the various dignitaries, representatives from all levels of government and nearly all Jewish organizations, and all who had come to welcome him.

“Your warm and cordial reception is deeply moving,” the Rebbe said, “but the joy in my heart caused by this meeting is overwhelmed with pain and concern for the plight of our brethren on the other side. Their cry for help echoes in my ears and heart. I have not come to seek my own refuge,” the Rebbe exclaimed.

“Europe is aflare, countries are being savagely overrun, Jews are being mercilessly massacred, there exists in Europe a holocaust which defies description. America’s conscience must be awakened, and above all, American Jewry must alert itself to the life saving mission now on its hands as never before in the history of mankind.”

As it turned out, the Rebbe’s mission was actually twofold. While he had to focus concern on what was happening in Europe, he knew that religious Jewish life in America sorely needed to be revitalized.

American Jewry was by in large frozen in complacency, and he realized that – as he phrased it – “the ice of American Jewry must be melted.” Toward this enormous task with all its ramifica¬tions he vowed to dedicate himself.

On the very first day of his arrival he founded his first school in the United States. A number of senior Yeshiva students registered to study under his guidance, and temporary quarters were immediately arranged. This small group of scholars soon became the nucleus of the large school network he was to establish in America.

The Rebbe could not contently acquiesce to the new community which had formed around him in New York alone. With his keen pioneering perception he concluded that if there was a “lost generation” of Jews in America, it was the new one, the children, which can and must be salvaged from ignorance of their glorious heritage and way of life.

He sent forth capable and determined young men to found Jewish day schools in Jewish communities far from New York. These schools would educate all Jewish children regardless of background or previous orientation. Characteristically, the young emissaries encountered strong opposition. The schools were refuted by those who considered them unfashionable and the whole idea preposterous. But the stubbornly dedicated young men, most of whom were American born, held their ground, and before long opposition gave way. The Rebbe’s schools were not only there to stay but also became the forerunner of the Jewish day school system with schools in nearly all sizeable Jewish communities throughout the country.

The Rebbe soon after his arrival also founded a number of other organizations to cope with matters of Jewish concern. His Merkos L’Inyonei Chinuch (Central Organization for Jewish Education) has become one of the largest Jewish international educational organizations of its kind in the world today. His Machne Israel is devoted to problems of Jewish welfare; Kehot Publication Society is the world’s largest publisher of Chassidic literature – to mention but a few of his more popular organizations.

Rabbi Joseph Schneersohn possessed a uniquely multifarious personality. For despite his expansive communal activity, he was, after all, a spiritual leader of countless thousands from all walks of life, from all over the world, who continually sought his counsel.

His mind and heart were constantly and devotedly attuned to the call of the Jewish masses, yet his sincere concern for the individual was fatherly.

In the tradition of Chabad-Lubavitch leaders of which he was the sixth in succession, he contributed his profound and articulate teachings to the annals of Chabad philosophy. The recent gradual publication of his discourses and writings attest to the genius and stature of this man so completely steeped in the inexhaustible amplitude of the Torah.

It is unfortunate that the Rebbe’s epoch making heroism while in the Soviet Union has not been, and for obvious reasons cannot be, committed to print. During his many years in Russia, despite vicious and relentless attempts to destroy Judaism, the Rebbe lead his adherents in raising generations of loyal Torah true Jews. The persecution, imprisonment and physical torture suffered as a result of his efforts there, left its mark on his body. Those who had seen him during his visit to the United States in 1930, saw a marked difference in seeing him upon arrival in 1940. His voice was not nearly as audible, his reddish golden beard turned silver, his body noticeably weaker.

Yet the temptation of abundance and sudden freedom can be an equally difficult obstacle to surmount. As far as the Rebbe was concerned, though, his undaunted spirit, his vision and determina¬tion was, to say the least, unchanged, in the free world.

During his ten years in the United States until his passing in 1950, he succeeded in transplanting the “Israel of Old” in this country. In the land once thought to be doomed never to see a Torah true future, he sunk deep and fruitful roots.

As Divine Providence would have it that decade served as a prelude to the era of his successor and son-in-law, the present Lubavitcher Rebbe, Rabbi Menachem M. Schneerson, whose spiritual affluence and magnanimous abilities have since his ascension in 1950 long become universally recognized, and whose influence – directly or indirectly – today penetrates the mainstream of Jewish life in communities throughout the world.

Therefore, in marking the 25th anniversary of the late Rebbe’s arrival to the shores of the United States of America on the 9th day of Adar Sheni – this year on Saturday, March 13 – it is not only American Jewry but indeed world Jewry at large which has much thanks to give in commemorating this auspicious milestone in Jewish history.”