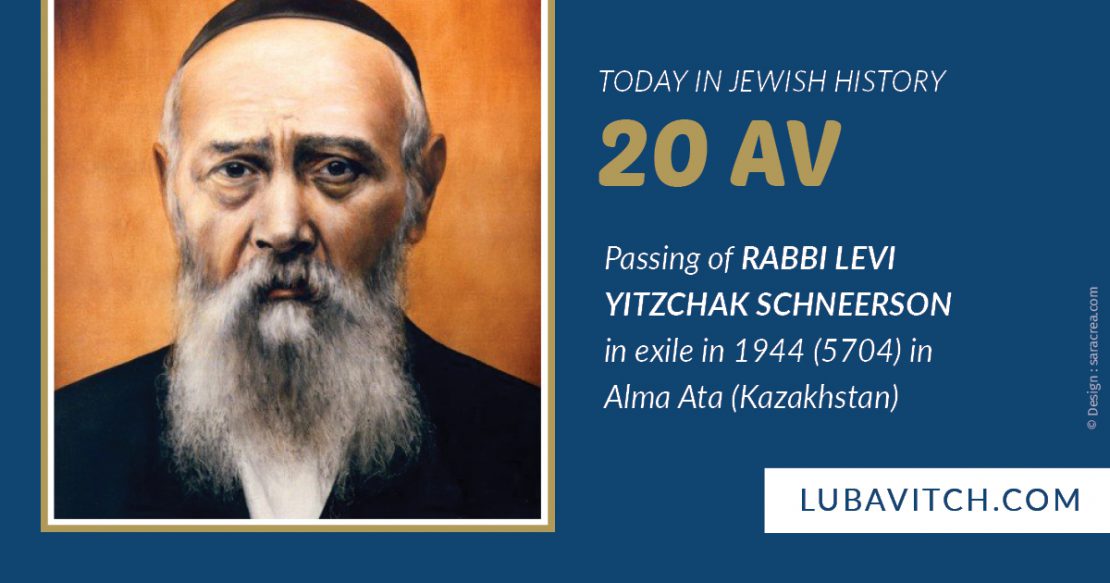 The 20th of Av (corresponding this year to August 17) marks 78 years since the passing of Rabbi Levi Yitzchak Schneerson (1878-1944), father of the Lubavitcher Rebbe.

Rabbi Levi Yitzchak was a renowned scholar who served as the chief rabbi of Yekaterinoslav (now Dnepropetrovsk, Ukraine) for thirty-two years, until he was arrested by Soviet authorities and interrogated for his activism on behalf of the Jewish community. He was sentenced to five years of exile and sent to Chi’ili, Kazakhstan, in the remote Aqtobe region in Central Asia. His wife, Rebbetzin Chana, followed him there soon after, and even here, the couple found ways to help, sustain and inspire Jews in distress and need.

After serving his term, now physically weakened by the hardship of his exile, the Rabbi Levi Yitzchak and his wife moved to Almaty, Kazakhstan, where his health continued to deteriorate. He passed away shortly thereafter.

While in exile, Rabbi Levi Yitzchak wrote voluminous notes of his own commentary on themes in Torah, most of them esoteric, Kabbalistic. With little provision of paper and no ink, he wrote most of his notes in the margins of books, using ink that his wife made from locally grown berries. His legacy lives on in his surviving works, which were eventually published into a five-volume set entitled Likkutei Levi Yitzchak.

Related Articles
View All
History
Birthday of the fifth Chabad Rebbe, Rabbi Sholom DovBer Schneerson in 1860 (5621)
20 Cheshvan: Birthday of the fifth Chabad Rebbe, Rabbi Sholom DovBer Schneerson in 1860 (5621).
History
Chabad Marks Birthday of Movement’s Founder
On 18 Elul, we celebrate the birthday of Rabbi Schneur Zalman of Liadi, founder of the Chabad-Lubavitch movement.
History
Tisha B’Av: Remembering for a Better Future
This evening, Jews around the world will remove their shoes, begin a 25-hour fast, and sit low on the floor in the manner of mourners.
History
Anniversary of Rebbe’s Liberation from Soviet Prison
Today, on the Jewish calendar, marks the 95th anniversary of the miraculous liberation of the late Lubavitcher Rebbe, Rabbi Joseph Isaac Schneersohn, from Soviet prison.
Get Inspiration to your inbox!
Newsletter
Join our weekly newsletter for inspiration and updates
Donate
Find Your Local Chabad Center
Subscribe
|
Log In
Chabad
About Chabad-Lubavitch
About Chabad Lubavitch
The Rebbe
Headquarters
Magazine
Magazine
News
News & Updates
In The Media
Impact
Social and Humanitarian
Social and Humanitarian
Education
Education
Community
Community