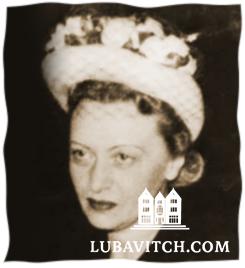 (lubavitch.com) Greatness comes in many forms. Often we imagine the character of a giant as someone who influences an entire world, forgetting the silent majesty of those who make such greatness possible.
While much is to be said of the global achievements of the Lubavitcher Rebbe, Rabbi Menachem M. Schneerson, little is known to the public about the life and accomplishments of his wife, Rebbetzin Chaya Moussia (Mushka).
On the 22nd day of the Hebrew month of Shevat, corresponding this year to Monday, February 16, 2009, Lubavitch women around the globe commemorate the anniversary of her passing in the year 1988.
The second daughter of the sixth Lubavitcher Rebbe, Rabbi Joseph I. Schneersohn, Chaya Moussia Schneersohn descended from the bloodline of Lubavitcher Rebbes. Born in the late winter of 1901 in Babinovitch, a small Russian town located near Lubavitch, she inherited the name of her paternal great-great-grandmother, wife of the third Lubavitcher Rebbe.
Growing up in her father's home, the young girl was witness to tremendous strength of character with which her father challenged the stubborn religious intolerance of communist Russia. At a young age, her resolute dependability prompted her father to involve her in his personal affairs that sometimes included dangerous missions involving the underground network of Jewish educational institutions. In 1924, when she was only 23, he entrusted her with the power of attorney, to oversee personal and institutional financial and legal matters on his behalf.
Following her father's imprisonment in Leningrad, on charges of the Soviet crime of religious activism, Chaya Moussia followed him to exile in Kastrama where she tended to the needs of her ailing father who was battered from the torture he endured in prison. While still in her youth, Chaya Moussia proved to be the caregiver who would later support one of the greatest spiritual-caregivers of the twentieth century.
In the autumn of 1927, religious persecution forced her father and family to flee Russia for Riga, Latvia. During the following winter of 1928, in Warsaw, Poland, she wed Rabbi Menachem M. Schneersohn, who, following her father's passing in 1950, succeeded him to become the seventh Lubavitcher Rebbe.
The young couple lived in Berlin until the rise of the Nazi regime in 1933, which forced them to flee to Paris. When German forces invaded France in 1940, they again fled to Nice in the south of the country. During this time, the Rebbetzin together with her husband aided many Jews by providing financial and other assistance, allowing them to escape almost certain death in the hands of the Nazis.
In 1941 they boarded the Serpa Pinto on which they sailed from Marseilles via Portugal to the United States of America.
After the passing of her father, she was instrumental in convincing her husband to overcome his reluctance in assuming the mantle of leadership of the Lubavitch movement.
In a deeply Chasidic way, she excelled in personifying the trait of dignified modesty. For the wife of a world-renowned figure, she kept a very low profile and seldom appeared in public.
But the visitors she received to her home on President Street, in Brooklyn, invariably took note of her dignity, the wit and wisdom that peppered her conversations, and her maternal concern for the wellbeing of others.

Rebbetzin Chaya Moussia passed away at the age of 86, on February 10, 1988. Though she died childless, thousands of young girls have since been named for her. These young girls, and women of Chabad at large, look to her exemplary fortitude, her commitment to Jewish life and her overall comportment as characteristics of Jewish womanhood to be emulated.