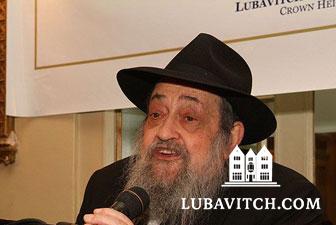 Rabbi Sharfstein was a long time, distinguished member of the Executive Committee of Chabad-Lubavitch Rabbis.

Born in New York City on the Lower East Side, he was sent by the Lubavitcher Rebbe to Cincinnatti in 1954, where, after the passing of the renowned luminary, Rabbi Eliezer Silver, he became Chief Rabbi of the Vaad Ha-Ir of Cincinnati in the late 1960s.

Rabbi Sharfstein, known for his erudite grasp of Jewish law and its practical application, was sought out by Chabad Shluchim, rabbis and lay individuals worldwide, for his halachik expertise.

He is survived by his wife, Rebbetzin Reba Sharfstein, his children: