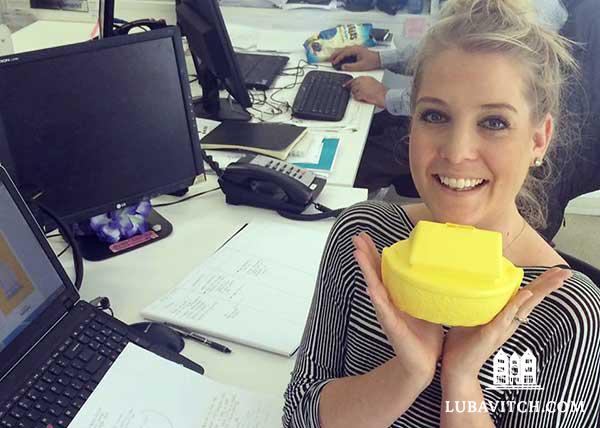 In time for the Jewish New Year, Chabad House of Johannesburg kicked off a campaign to do random acts of goodness and kindness. Calling the campaign Ark, an acronym for Acts of Random Kindness, Chabad manufactured over 57,000 bright yellow plastic canisters in the shape of an ark.

Over the past week the campaign has become a sensation in South Africa, with celebrities taking photos with their ark and business organizations uniting on this, announcing that they are, “doing random acts of kindness,” with the hash-tag #changetheworldforgood.

The campaign to focus on daily charity-giving was launched by the Rebbe in 1974. The Rebbe established a charity campaign that encouraged distribution of coins at events so that people would have the opportunity to give charity. The Rebbe advised many to have charity boxes visibly placed at home, in the office and in schools, so as to encourage habitual giving to a cause of one’s choosing.

“There is so much negativity in the world, so why not change things positively,” said Elana Afrika-Bredenkamp, a former Miss Africa, in a promotional video for the kickoff of the Ark campaign. Elena is a South African TV host and regarded as one of the most influential South Africans on social media, “All you need to do is take this little box, fill it with money, fill it with coins, teach your children how to do it,” she said.

Rabbi Dovid Masinter, a Chabad representative in Johannesburg, who is spearheading the campaign, has been involved in helping the less fortunate in Johannesburg. He has assisted in helping open shoe-shine stands in shopping malls, opening libraries in places where they had no other way of obtaining books, and teaching families to grow their own fruit and vegetables. The rabbi likes to say: “Your old clothes is another’s treasure, your pocket change is another’s riches.”

The Ark campaign is of a part with Chabad’s social activism that promotes random acts of goodness and kindness to change the world for good.