Rabbi in Profile: The Frisco Kid, the Grateful Yid, The Rally Rabbi 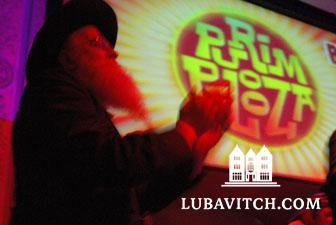 He hangs out with rock stars, cruises the city on a three-wheeled "Mitzvah Bike" and blows the shofar to rally crowds at major league ball games. It's all a far cry from Crown Heights, where this spiritual leader earned his rabbinic ordination.

A married father of five grown children, Rabbi Yosef Langer looks every bit the Chabad Chasid. Like many Chabad shluchim or emissaries, he spends his days involved in Chabad outreach. He also organizes community events, leads educational programs, fund raises and aims to spiritually nourish local Jews and visitors to the Bay Area. But that's where the similarities end. Rabbi Langer is not, by any means, your typical Chabad rabbi.

"The image of me is that I am an ex-hippie and my forte is dealing with fringe," says Rabbi Langer, who gave up his freewheeling ways in the 1970s for Orthodox Judaism. "Because I'm a loving, out-of-the-box thinking and soulful individual, I hook up with all kinds of different people in the world. It's all about touching every Jew, and every human being, in a real way that moves them closer to themselves, and myself and the Almighty, the Infinite Source of Life."

His annual ritualized "Purimpalooza" event is perfect example of how Rabbi Langer integrates Jewish tradition with mainstream interests. Last year's headliner was Matisyahu. This year's line-up of performers includes DJ/VJ Stefan G, rocker Rebbe Soul, puppet rapper Queen Esther, premier pianist George Michalski, spoken word performer Luna Angel and her brother rapper Moise Angel. Both call themselves "Jewmaican." As Rabbi Langer explains, "Hipster is about being in touch with your soul, expressing yourself through music, joy, creativity, just out there without any inhibitions, in a way that is real and spontaneous."

Back in the mid-70's, rock 'n' roll concert promoter Bill Graham, a secular Holocaust survivor, partnered with a few Lubavitch rabbis to create the first public menorah lighting outside Israel. This 22-foot menorah still burns every Chanukah in the heart of S. Francisco. And from this home of the Golden Gate Bridge, crooked Lombard Street and the TransAmerica Pyramid, the annual menorah tradition has spread to countless other cities around the world.

Chabad's association with this very public ritual is well-known today, and the visionary who conceived the “Mama Menorah,” says Rabbi Langer, was Rabbi Chaim Drizin, then-director of Chabad of Berkeley, California. Rabbi Langer, his protege, produced the event.

"It's one of the greatest things Chabad has ever done," says Langer, 61, who now serves as director of Chabad of S. Francisco, which he founded in 1985. Over the years, Rabbi Langer's playful, innovative and eclectic working style has earned him a host of monikers, starting with "The Frisco Kid."

Rabbi Langer became director of Berkeley Chabad in 1979. That same year, Jewish actor Gene Wilder starred in a feature length comedy as a pioneering Old World rabbi wandering through the wild, woolly west on his way to lead a synagogue in San Francisco. The parallels were wacky and uncanny.

Then, in 1991, Rabbi Langer approached rock promoter Bill Graham with a new idea. His goal? To reach out to the legions of Jews attending Grateful Dead shows at nearby Shoreline Amphitheater. Soon, the dancing image of the "Grateful Yid" began gracing t-shirts. Over the years, the Grateful Yid's friends and supporters have grown to include a wide range of celebrities, including performers Wycliffe John, pianist George Michalski, radio host Michael Savage, a close personal friend of Rabbi Langer and Chabad for over 30 years, and an active participant in Chabad Programs from High Holiday services to Shabbos dinner to Purimplaooza; Men's Warehouse founder George Zimmer and David and Alex Graham, sons of the late rock promoter Bill Graham; performers Perry "Peretz" Farrell, who learns Torah regularly and puts on tefillin, and Santana are among the celebrities who have lit the Mama Menorah during public Chanukah lightings, drawing crowds to downtown Union Square.

Rabbi Langer's public persona grew once again when, at Jewish Heritage Night at AT&T Park last August, the S. Francisco Giants professional baseball team invited him to blow the shofar before the first pitch. When the team fell behind, he was invited back to home plate. His job was to blow the shofar and rally the stadium with the cry of "Charge!" The Giants surged ahead temporarily, then lost the game. But before the night was through, they had gained a new mascot: the Rally Rabbi.

"They got all the technical stuff to picture me and had me blow the shofar over the PA system. They showed me up on the scoreboard with all the bells and whistles. And the whole stadium was rocking, giving the charge," Langer says. "It was a special moment." It was such a hit that next summer, on August 8th 2007, at the next annual Jewish Heritage Night, the Giants organization will present guests with a bobble head doll modeled after Rabbi Langer. Chabad will celebrate the night with a parking lot tailgate party with live entertainment and complementary He'Brew, The Chosen Beer, courtesy of local entrepreneur Jeremy Cowan.

Rabbi Langer sees his role as the Rally Rabbi as a spiritual endeavor. "Sport has gotten so bizarre with the high salaries, big egos, taunting from the fans and brawls from the stands. So the message of the Rally Rabbi is, in order to make a team of this world of ours, we have to increase acts of goodness and kindness among each other, as the Lubavitcher Rebbe wanted us to."

A natural extension of this campaign is a mitzvah tank. But in S. Francisco, not just any vehicle will do. So at the end of March, on the anniversary of the Lubavitcher Rebbe's birthday, Rabbi Langer and his son, Moishe, who recently received Chabad rabbinical ordination in Miami, will cut the ribbon on the world's first Cable Car Mitzvah Mobile. Their mission: to carry sightseeing guests in a "Acts of Goodness and Kindness Tour," in which participants pledge to complete a gesture that helps foster peace and understanding, to help bring Moshiach.

As Rabbi Langer explains, in addition to refreshments and an espresso bar, the cable car will be equipped with a library, tefillin and "a warm heart to greet everyone who comes aboard."

In his latest burst of creativity, the official Chabad House (2950 Anza Street) is also being rebuilt with what Rabbi Langer and his wife, Hinda, call the Bay Area's first "mikveh-spa." Likely offerings include a sauna, jacuzzi, with other amenites. "The mikveh," says Rabbi Langer, "will be the centerpiece." In addition to running a preschool and a yeshiva day school for about 75 boys and girls with his wife, the Langers are also looking to establish a downtown restaurant for Shabbat hospitality. So they are teaming up with a group of local and New York entrepreneurs. The menu will feature daily services and Shabbat meals in one of the country's most popular tourist and conference destinations. As Rabbi Langer explains, "Until we're in the ‘Promised Land’ it's really never enough."

The Langers' children are carrying on the work of their parents. Daughter Chaya teaches in the school. Another daughter, Miryum Rochel, "Yummy," works with special needs children throughout the city to "bring Judaism to a place not really being addressed," Rabbi Langer says. And her husband, Rabbi Peretz Mochkin, will begin serving as educational director for a new program, North Beach Chabad, "NBC," under the auspices of Chabad SF in the neighborhood where the Beatnik era began. Another married daughter, Nechama, an artist, drummer and dancer who lives at Bat Ayin in Israel, is slated to work at Camp Gan Israel this summer with her husband, Micha.

"We don't look for riches or a more prestigious job. To have your children continue on with your work is the biggest pay off all," Rabbi Langer says. "It's given me so much joy and fulfillment."

Rabbi Langer counts as his influences Rabbi Drizin and his wife, Leah. "They brought me into the Chabad world," he says. Another inspiration is the support of Rabbi Shlomo Cunin, director of Chabad of Los Angeles, and initiator of the Chabad telethon and other innovations. Rabbi Langer credits Rabbi Cunin as the one who "fed me my first Jewish soul food, my first cholent. He has been the inspiration for the enormous outreach organization Chabad has become in California and Nevada."

What's next for Rabbi Langer? "I want to go to the sports world and the entertainment world and get endorsements, signatures on the Rally Rabbi bobble head and its mission statement. The Rebbe gave this message of increasing acts of goodness and kindness. Everyone gets in on this mitzvah. It's a real opportunity to rally the world."

——————————————————————————–
Lisa Alcalay Klug is a contributor to the New York Times, Forward and many other publications. Her book, Cool Jew: The Ultimate Guide for Every Member of the Tribe, will be published next spring by Andrews McMeel.