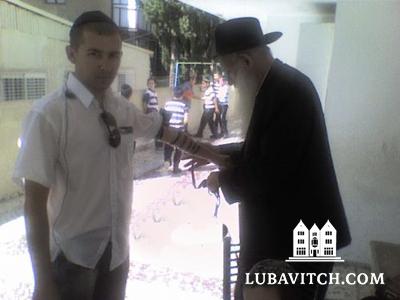 Born in Austria in 1936, Rabbi Tauber nearly froze to death in the bitterly cold winter as his mother became lost while taking a “safe” route to a certain village through a forest. Rabbi Tauber’s son, Ariel, related the story to Israel National News. “As the little boy began to turn blue from the cold, his mother began to weep, and urged her son to pray with her that the G-d of Avraham and Yitzchak, for whom he was named, would hear their pleas and help them find their way.

“As she was praying, a man walked up, appearing out of nowhere,” the younger Tauber relates. “When asked where he had come from, and how he had known where they were, he replied that he had ‘heard a Jewish mother crying’ and came to help.”

The mysterious man had with him a blanket, and took a few minutes to rub the little boy’s hands and feet until they returned to a normal color. He then gave the amazed mother directions to the village she had been unable to find, wrapped the blanket around her son, and handed the boy to her. As she bent her face to her son to embrace him, she expressed her heartfelt thanks but when she raised her eyes, the mysterious stranger had disappeared, and the forest was still.

“We believe it was Eliyahu HaNavi (Elijah the Prophet) who came to save my father that night,” says the younger Tauber, adding that his father clutched a mezuzah wrapped in a piece of that same blanket as he left this world for the next.

His tall form and friendly visage was especially well known in the Chabad-Lubavitch world headquarters of “770” Eastern Parkway in the Crown Heights neighborhood of Brooklyn, New York, where he often visited the Lubavitcher Rebbe, Rabbi Menachem Mendel Schneerson of righteous memory.

It was at the Rebbe’s behest that Tauber, a Kohen, set forth on his missions; the Rebbe had told him to bless the donors and any others he found who were in need. The Rebbe promised that those blessings would carry the strength of the Kohen Gadol (High Priest) of ancient times, and he gave Tauber a special coin to be used as a “kinyon,” or transactional surety, while delivering his blessings.

Rabbi Tauber often said that he never knew what would come out when he began a blessing – and even he was sometimes surprised by the results.

“His brochos [blessings] always came true,” commented Sinai Julian, one of the beneficiaries of Rabbi Tauber’s blessings. “I personally know of many; one involves a close friend, who had lost a child in a late stage of pregnancy and who was worried that she would be unable to have more. She became pregnant shortly thereafter with a son, exactly as he said in the blessing. And there were many others that I am not at liberty to disclose.”

Rabbi Tauber was also involved in helping others raise money for various causes, including construction of the mikvah [ritual bathhouse] in Arad.

A resident of Bnei Brak, Tauber is survived by his wife, Shulamit, and three grown children – a son, Ariel, and Rachel and Yehudis.