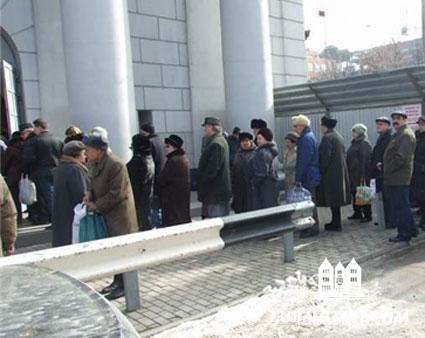 (lubavitch.com) In places like Dnepropetrovsk, where the financial crisis has hit the 55-plus population hardest, the city’s Jewish community is reaching out with help. Earlier this week, thousands lined up at the Central Golden Rose Synagogue to receive Purim food packages distributed by the Jewish community.

Zelig Brez, director of Dnepropetrovsk’s Jewish Community, said that the numbers, much increased since the last community-wide food distribution at Rosh Hashana, is indication of “how much this segment of the population has been hurt. “ In the past, the packages were symbolic gestures, whereas today, said Brez, “people look to this distribution because they just need the help.”

To facilitate orderly  distribution, people were asked to come at designated times according to their age and place of residence. Leaders of the Jewish community reassured the community of an adequate supply despite the large numbers.

The package contained a variety of foods and basic staples for the kitchen, including oil, sugar, flour, as well as fish and sweets. Each package came with a letter of warm greetings and blessings signed by the city’s Chief Rabbi Shmuel Kaminetsky and the President of the Jewish Community, Mr. Gennady Bogolubov.