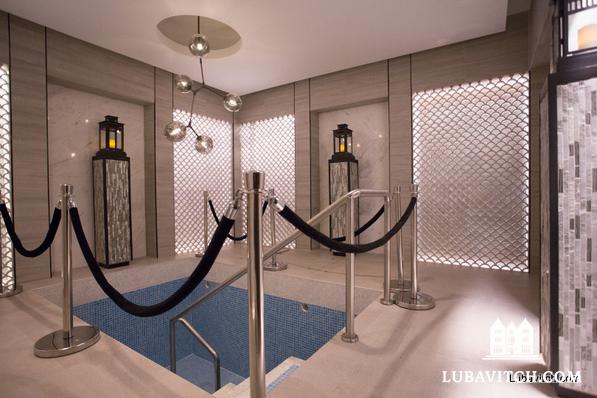 The new mikveh at the Rohr Chabad Center in Puerto Rico.

“This magnificent center began with a simple wish: for Puerto Rico to have its own mikveh,” Mrs. Rachel Zarchi said, recalling her vision when she and her husband, Rabbi Mendel Zarchi, arrived on the island eighteen years ago. “The construction of the mikveh evolved into this glorious building—the actualization of many years of effort and yearning. Tonight is the fulfillment of a dream.”

Governor Padilla spoke warmly of this unusual development. “I feel that I am here in the home of our father in faith. Puerto Rico may be going through turbulent times, but we have to remember that we have the best pilot—God.”

Formerly under Spanish rule, Puerto Rico was inhospitable to Jews for hundreds of years. Today, 3000 Jews make their home on this sun-drenched archipelago, and thousands more pass through for business and travel.

Locals and travelers, grateful for Chabad and its services here, have put their support behind the project. Despite setbacks from the economic crisis several years ago, the project was completed with a grant from the Rohr Foundation.

“You learn to appreciate the value of every individual’s contribution, big or small,” Rabbi Zarchi said. “It’s a testament to the unity of the Jewish people that we feel a responsibility to one another, regardless of where we find ourselves.”

“The new establishment,” say community members Sarah and Isaac Levy, “will change the feeling of being Jewish in Puerto Rico forever.”

For more information or to contact Chabad of Puerto Rico, visit www.chabadpr.com.

Related Articles
View All
Pasta and Puerto Rico
It’s hard to believe that a Chabad House in Puerto Rico—an island where no kosher meat, chicken, or dairy products are produced—can offer a kosher,…
An Oasis in Paradise
Rolling green hills, lush tropical foliage and picturesque beaches of St. George, Grenada, create a landscape of scenic beauty and tranquility, about as far removed…
Get Inspiration to your inbox!
Newsletter
Join our weekly newsletter for inspiration and updates
Donate
Find Your Local Chabad Center
Chabad
About Chabad-Lubavitch
About Chabad Lubavitch
The Rebbe
Headquarters
Magazine
Magazine
News
News & Updates
In The Media
Impact
Social and Humanitarian
Social and Humanitarian
Education
Education
Community
Community