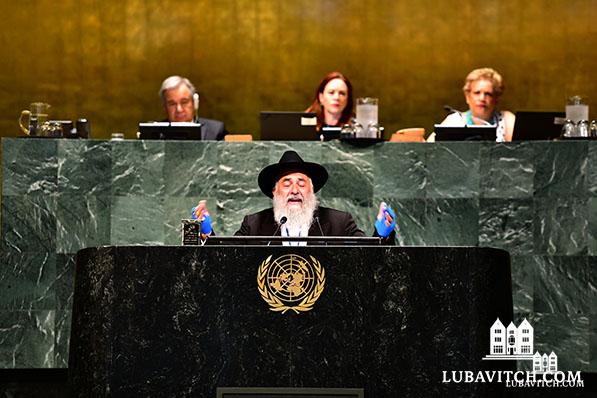 “Anti-Semitism is not a Jewish problem, this is a problem for the world.”
Photo Credit: Baruch Ezagui

Rabbi Yisroel Goldstein of Chabad of Poway addressed the UN General Assembly this morning during a special session on combating anti-Semitism. “Anti-Semitism is not a Jewish problem, this is a problem for the world,” said the rabbi, his left hand still bandaged where his index finger was blown off in an anti-Semitic attack on his synagogue eight weeks ago. He discussed recognizing the value of every human life, using social media as a platform for love and flooding the world with practical good deeds.

“I didn’t think it could happen here. This is the cry of Jewish people across the world, alarmed by the sharp increase in anti-Semitic violence and abuse,” said María Fernanda Espinosa, President of the General Assembly, as she opened the session. According to the European Union Fundamental Rights Agency, last year saw the highest number of fatal attacks on Jews in decades.

Secretary General of the UN, Antonio Guterres, who “couldn’t miss this session,” even though he was set to leave to attend the G20 summit in Japan, thanked Rabbi Goldstein for his “inspiring actions since the shooting.”

Resonating with emotion, Rabbi Goldstein recounted the moments when terror visited his congregation. “Lori did not deserve to die because she came to Synagogue, she was killed because she was a Jew,” he said referring to Lori Kaye, his congregant who was killed in the attack. Lori’s daughter Hannah and sister Randy accompanied Rabbi Goldstein who was invited by the Israel Mission to the UN. He ended the account with the words he shared with his congregation, as they huddled in fear on the street, waiting for emergency services to arrive. “Am Yisrael chai—the Jewish people will always live on.” 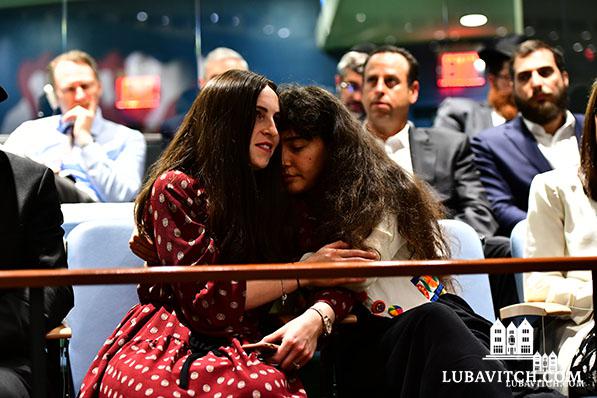 Israel’s Ambassador to the UN Danny Danon was a leading force behind the General Assembly’s decision to discuss combating rising anti-Semitism, with a focus on how the age-old hatred presents in social media. “Hannah and Randy are reminded every day that Jews cannot pray in synagogues without looking behind their backs,” he addressed his fellow state representatives. Outlining his vision for combating the rise in online hate posts he said, “It is time for us to declare war on anti-Semitism.”

The proliferation of this online hatred was described by Mr. Ahmed Shaheed, Special Rapporteur on Freedom of Religion or Belief. In 2016, research commisioned by the World Jewish Congress found that more than 382,000 posts were posted to social media platforms, with an average of 29 million users exposed to anti-Semitic posts.

“If hate can leap across continents through social media, so can the love that will defeat it,” said Rabbi Goldstein. “Let’s use the same technology that killers use to spread hate, to conquer the world with billions of good deeds.” He folded a dollar bill and placed it in a charity box he had brought with, “I will start the good deeds right here.”

Referencing a speech written by the Lubavitcher Rebbe that was intended for the UN thirty-two years ago, Rabbi Goldstein shared other solutions. “After the Great Flood, G-d gave Noah and his descendants seven laws that are the bedrock of civilization. The Rebbe pleaded for the UN to go back to the basics and imbue these laws in society. If we did, this world would be a different one and perhaps we wouldn’t have lost the 150 million people who have been murdered over the last 200 years.”

He also encouraged the plenary to focus on our common humanity. “When you look at me now, you see a man with a black hat and a black jacket and the first thing that comes to mind is that I look like a Jew. Well you know what? I look just like you. We were all created by G-d Almighty.”

He ended with a prayer. “May we merit, as is written on the walls of the UN, to soon beat our swords into plowshares. May the sword of social media be beaten into an overflowing conduit spreading light, love and peace.”

Photos by Baruch Ezagui for Lubavitch.com 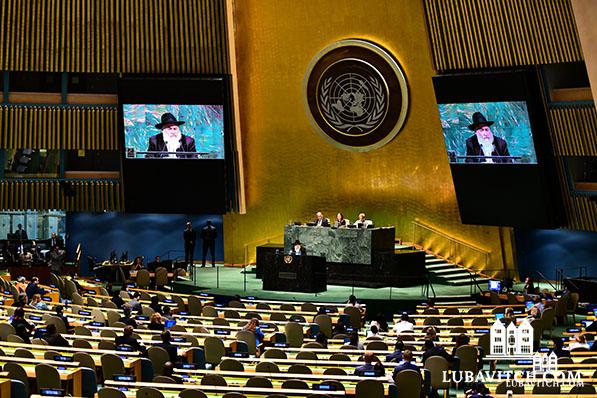 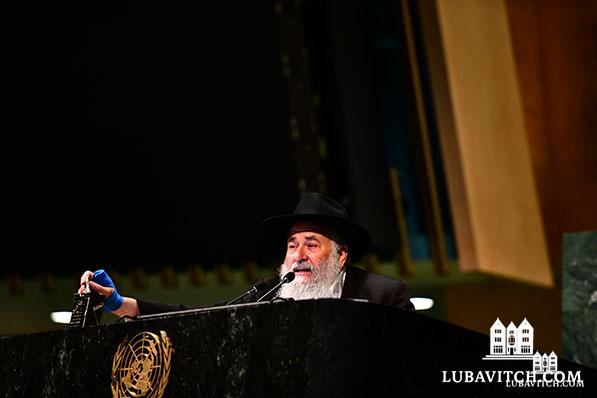 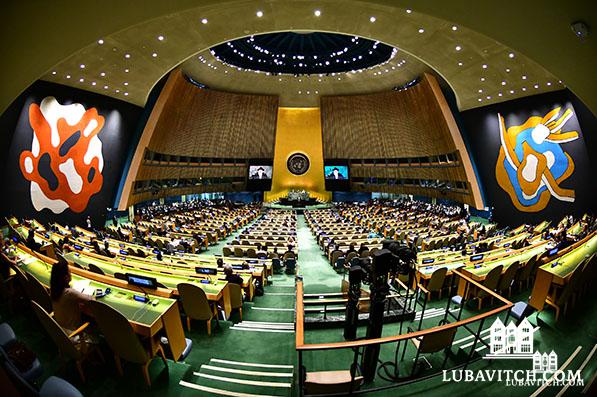 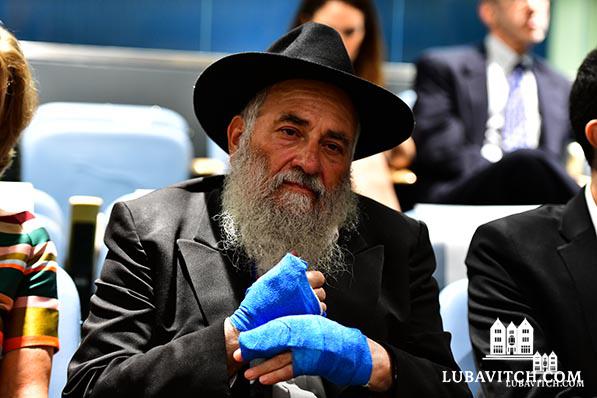 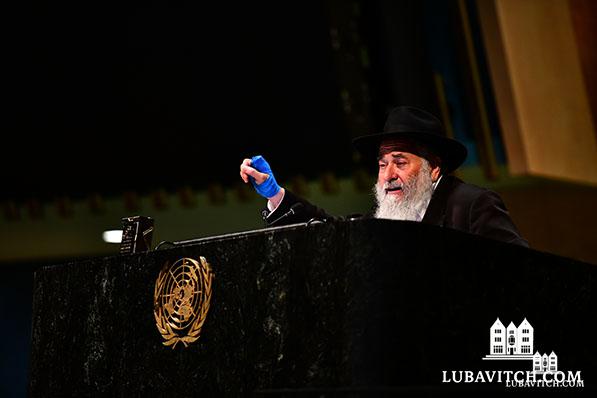