Last month, darkness made its way into the foyer at Chabad of Poway, California. On Wednesday, it was a scene of joyous celebration as the community honored the memory of the murdered, their beloved Lori Gilbert-Kaye, with the completion of a new Torah scroll.

The scroll was a gift made by the Jaffa Family Foundation of New York, Cleveland and Minneapolis, who have given eighty such endowments to synagogues around the world.

Facilitated by Brooklyn-based pharmacist Rabbi Bentzion Chanowitz who runs the Beis Yisroel Torah Gemach—a nonprofit that furnishes Chabad centers with loaned Torah scrolls. Most depend on these loans until they raise the $40,000 tab to purchase their own.

“When I heard of the shooting, I knew that the media frenzy would soon be over and the community would be left to heal,” says Chanowitz. “I’ve seen time and again how dedicating a Torah in memory of a loved one has been a tool of healing for those grieving their loss.” When Chanowitz contacted the foundation, “they insisted that Poway’s Torah should be brand new and a gift, not merely a loan.”

The ceremony began with the completion of the writing—giving congregants the chance to inscribe their own letters. Oscar Stewart and Jonathan Morales, the community members who confronted the shooter and chased him from the premises that day, were recognized as they wrote their letters. The crowd applauded as Lori’s husband, Dr. Howard Kaye and their daughter Hannah penned the final letter. Using a pointer that was purchased by Lori on a recent trip to Israel, Rabbi Goldstein, his mutilated hands still bandaged, followed along as the final passages of the Torah were read.

“This letter which Dr. Kaye and Hannah inscribed, was a ‘Lamed,’ the letter that ends the Torah and begins the name Lori,” he noted. 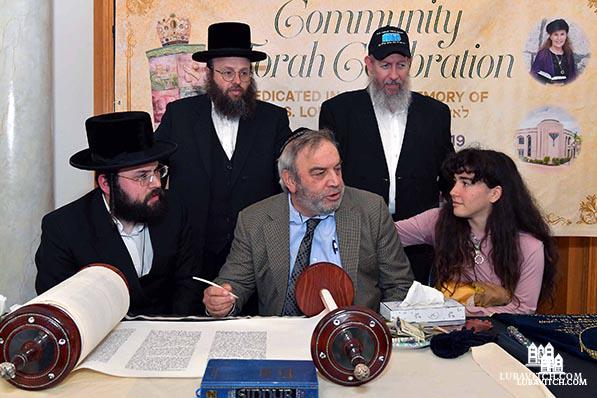 Dr. Howard Kaye inscribes the final letter in Lori’s torah, accompanied by his daughter, Hannah. Bentzion Chanowitz stands behind them to the right, along with members of the Jaffa Family Foundation. (photo credit:Harvey Rogoff)

The Torah was lifted and dressed in a velvet cover embroidered with Lori’s name, topped by a silver breastplate, Lori’s pointer, and an ornate silver crown. The silverware was donated by Best Embroidery in Brooklyn. “We just want them to know that we’re in this together because we are all brothers,” a representative said.

The celebration then moved to the streets. Jubilant congregants held a canopy over the heads of Dr. Kaye and Rabbi Goldstein as they carried the scroll out of the building. The crowd danced and sang as live music played from a mobile band perched on a flatbed truck.

The event was held on Lag B’Omer when Jews traditionally mark a pause from a period of semi-mourning. It also marked the end of the thirty-day mourning period for Lori. “Her loss is still very raw, and it’s very painful. The Torah tonight is going to begin healing our hearts with the knowledge that Lori’s life was not lost in vain,” Rabbi Goldstein said.

As the crowd gathered back in the synagogue, delivering the Torah to its new home in the ark at the front of the vestibule, Dr. Kaye stood on a dais, facing his fellow congregants. “On April 27th we experienced a tragedy, but we also saw a miracle,” he said, putting into words the conflicting emotions of joy and pain palpable in the atmosphere.

“It was all very raw,” said Rabbi Chanowitz who traveled with the Torah from Brooklyn to Poway, and stayed for the celebration. He arranged a send-off party before he left New York. He said tens of law enforcement officers, donors and others showed up to express their solidarity and send their love as they accompanied the Torah from his house to the airport.

The Poway community and the Kaye family held other private events to mark the ending of the thirty-day mourning period over the weekend including one ceremony attended by Israel’s Chief Rabbi Dovid Lau. A hundred copies of the book, A Time to Heal, a collection of letters written by the Lubavitcher Rebbe in response to tragedy, were distributed to those who were present at the time of the attack. Lori had purchased a copy of the book two weeks before she was murdered, as she was mourning the recent death of her mother.

Perhaps the most poignant memorial though, was when 200 people—double the amount who had been there on the day of the attack—showed up for services on Shabbat to hear the weekly Torah portion being read from Lori’s Torah scroll for the first time. “It was standing room only, even with the extra seating. It was very emotional, everyone wanted to be there for Lori, for Hanna and Dr. Kaye and for the community,” a participant shared with Lubavitch.com. 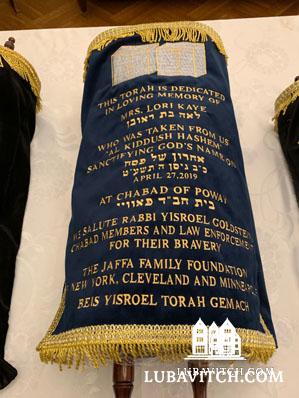