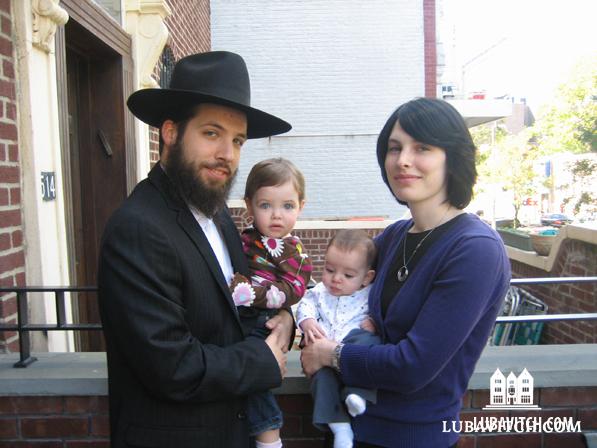 Rabbi Eli and Raizel Rosenfeld with their two children, Mushka, age one and a half, and three-month old Menachem Mendel.

(lubavitch.com) The only country in Europe still without its own Chabad representatives, Portugal will soon be welcoming a new addition to its 300-member Jewish community.

Rabbi Eli and Raizel Rosenfeld of Brooklyn, will be moving to Lisbon after the holidays, where they will settle with their two small children, and work to complement the achievements of Lisbon’s proud Jewish community.

In a statement released by Lubavitch.com, Rabbi Moshe Kotlarsky of Lubavitch World Headquarters, said the decision is “thanks to a grant by our cherished Mr. George Rohr,” and the result of the enormously successful Merkos Shlichus, or summer internships. In 2006, Eli visited Portugal, and he developed friendships with many in Lisbon’s Jewish community that endured and grew over the years.

“I’ve gone back many times since, and the warm reception we’ve received has had a lot to do with our decision to move there,” says Rosenfeld, 26.

The couple, who finalized their plans on a visit to Portugal prior to Rosh Hashana, point out that Lisbon has a beautifully restored synagogue—Shaarei Tikvah, a newly restored mikvah, and a very active community, made up of both Sephardic and Ashkenazic Jews, many of them in the medical and other professions.

“We feel blessed to be joining this strong community. We’ll be focusing on reaching out to Jewish people who are not affiliated, or who may be reluctant to get involved, and we also hope to work with Jewish tourists,” says Raizel, 23, who comes with life experience as the daughter of Chabad representatives in Connecticut.

Portugal has a long Jewish history, but its population numbers never rebounded from the infamous expulsions of the 15th century. In 1917, one hundred Jewish families of Marranos were discovered in Belmonte, in northeastern Portugal, and according to some statistics, a quarter of the country’s population is of Jewish descent.

To the Rosenfelds, the city has special interest because Lisbon was the point of departure for the Lubavitcher Rebbe, of blessed memory, when he left Europe for the United States in 1941. “The Rebbe made a public address here before he left, and for us, this connection is a big inspiration,” says Eli.

Once they settle in their apartment, they expect to be studying one-on-one with individuals and sharing their Shabbos table with guests. The local supermarket carries a line of kosher products, “but we’ll be asking family and friends, to bring staples such as kosher meat and dairy foods whenever they visit from abroad,” chuckles Raizel.

The Rosenfelds are parents to Mushka, age one and a half, and three-month old Menachem Mendel. While most of the community converses well in English, Eli and Raizel are determined to study Portuguese “so that we’ll be able to talk to our children.”