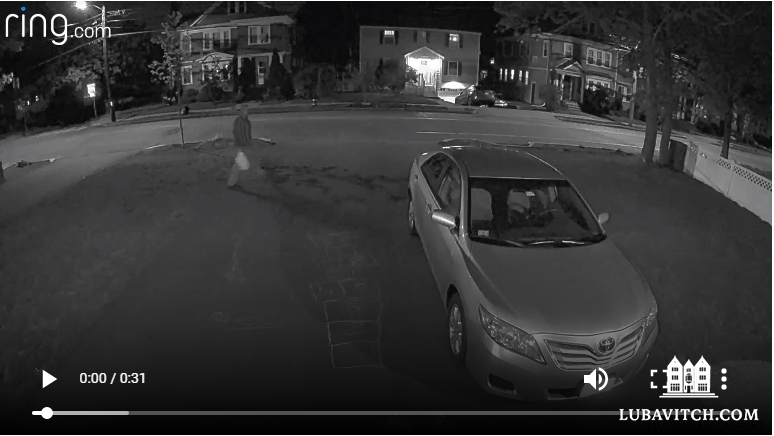 The first, at Chabad of Arlington, occurred last Saturday night, May 11. Chabad representative Luna Bukiet discovered the flames on the wood shingles of one side of the center and home after putting her children to sleep and hearing a fire alarm go off.

“I thought it was an electrical fire,” she remembers in a conversation with Lubavitch.com.

Thursday night, after a full day of activities including teaching Hebrew School classes on the premises, Luna and her husband, Rabbi Avi Bukiet smelled smoke again.

“I ran out and saw that someone had started another fire.”

She says city and state law enforcement are taking the matter very seriously, offering a $5,000 reward for information on the individual seen in the footage. So far, the leads they had haven’t panned out.

Later that night, a third fire was discovered at Chabad of Needham, Massachusetts, a half hour driving distance from Chabad of Arlington. Director Chanie Krinsky smelled the smoke and found a fire burning on the property right near her office. “I was in a fire as a teenager so I am very sensitive to the scent of smoke. I was instantly concerned because I was aware of the fire in Arlington. We vacated the premises and called 911 right away.”

She says the center’s security cameras showed a possible suspect. “Law enforcement is reviewing the footage from both centers.”

No one was injured in any of the incidents.

“Local law enforcement assured us that they’ll be upgrading security at the center,” says Rabbi Bukiet. Services at both Chabad of Arlington and Needham will continue as usual, with security.

Director of the global security commission at Chabad headquarters, Rabbi Mendel Sharfstein, says, “We are in touch with local emissaries regarding these concerning incidents, as well as members of law enforcement to ensure that the matter is investigated thoroughly. We hope they can make a determination soon about who was behind these heinous acts.”