PM John Howard Reaches Out To Chabad in Australia 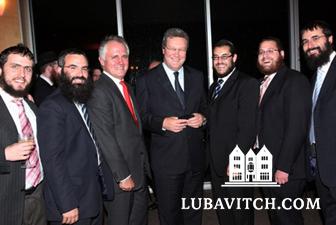 With Australia's Federal Election now in its final week, the government of PM John Howard points proudly to its record on support of Israel.
Sydney’s Chabad-Lubavitch head representative, Rabbi Pinchus Feldman, was among the city’s Chabad rabbis invited to meet with Australia's Foreign Minister, Mr. Alexander Downer. Downer spoke publicly of Australia’s support for Israel. It was one of only four other nations who voted against sending Israel's security wall to the International Court of Justice at a time when "fair and friendly " nations abstained from the vote.
Only the U.S., Australia and two Pacific Island nations voted with Israel on this matter.
Mr. Downer recalled his instructions to the Australian Ambassador in the UN to make his country’s voice heard in support of Israel.
He told the Chabad Shluchim that "we have principles of freedom that we value in this country and they are the right of every Israeli and Jewish citizen."
Chabad’s Rabbi Dovid Slavin, chaplain of the NSW ambulance Service, presented the Foreign Minister with yarmulke bearing the official logo of the ambulance service that forms part of Rabbi Slavin's uniform. The yarmulke is a mark of public Jewish pride and of the Jewish people’s accountability to G-d, explained Rabbi Slavin.
Mr. Downer conveyed his appreciation for the Jewish community’s support, and too for the wider educational and humanitarian programs of Chabad in Israel, Australia and around the world.