PM Harper To Chabad: Canada A Defender of Jews, Israel 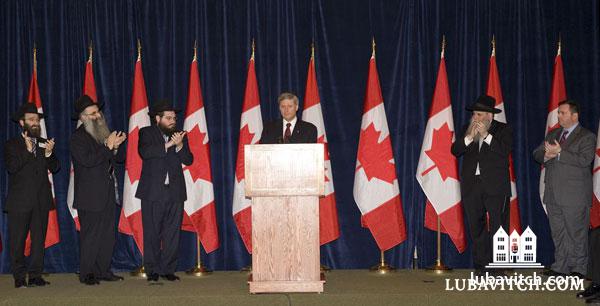 (lubavitch.com) Canada’s Prime Minister Stephen Harper greeted Chabad-Lubavitch Canadian representatives Thursday, denouncing anti-Semitism and promising to repudiate it wherever it surfaces.
“Canada will remain an unyielding defender of Jewish religious freedom, a forceful opponent of anti-Semitism in all of its forms and a staunch supporter of a secure and democratic state of Israel," he said.
The Prime Minister spoke at a ceremony on Parliament Hill where he was joined by Citizenship, Immigration and Multiculturalism Minister Jason Kenney and other MPs who turned out to honor Chabad-Lubavitch representatives during a regional conference. There are 50 Chabad centers serving the Canadian Jewish population.
"Anti-Semitism is a pernicious evil that must be exposed, that must be confronted, that must be repudiated, whenever and wherever it appears. Fueled by lies and paranoia we have learned from history it is an evil so profound, indeed as we saw in Mumbai, that it is ultimately a threat to us all," he said.
Mr. Harper expressed his condolences for the “brutal and senseless murders” of Rabbi Gavriel and Rivkah Holtzberg, emissaries of the Rebbe, who, “by performing mitzvahs and bringing more light into this world . . . were fulfilling the late Rabbi Schneerson's vision for strengthening Judaism.”
The Prime Minister noted that the arrival of new Chabad representatives in Mumbai “to carry on the work of the Holtzbergs sends a powerful message: The Jewish community will never bow to hate and violence.”
"When it comes to standing against hate and intolerance, none have persevered, none have been as resolute as the Jewish people," he said.