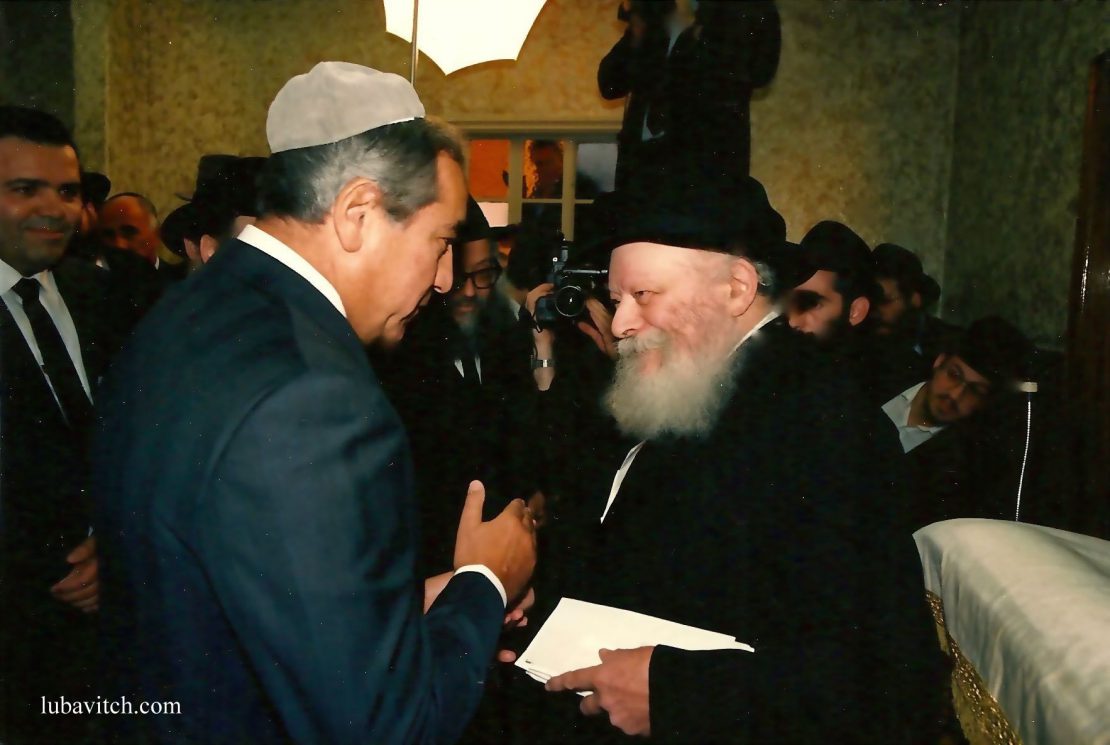 All News
Go to Photo Gallery
By Dovid Zaklikowski

Philanthropist extraordinaire, Mr. David Chase, a founding member of the Machne Israel Development Fund and Chairman of the Board of the Rabbinical College of America, passed away at the age of 86.
“Mr. Chase had a unique relationship with the Rebbe and was one of the founding officers of the MIDF,” said Rabbi Yehuda Krinsky, Chairman of the MIDF and its parent organization, Machne Israel. The MIDF is the development organization founded in 1984 by the Rebbe for the purpose of providing funding for Shluchim.
Mr. Chase was involved in the 1989 expansion of the shul at Lubavitch World Headquarters at 770 Eastern Parkway, and was at the side of the Rebbe when its cornerstone was laid, Rabbi Krinsky recalled. “From year to year, the Rebbe would remind me to invite Mr. Chase to address the Annual International Conference of Shluchim. He was a pillar of support to Chabad and will always be remembered for his cherished friendship and his lifetime of philanthropy.”
David Chase was a self-made businessman who survived the Holocaust and built his life anew. He escaped the concentration camp at Auschwitz jumping into a ditch as he and other inmates were being led to the gas chambers. He later took cover in the forest, but his parents and siblings perished in the Nazi concentration camps. He remembers that it was a sunny day in Auschwitz when his mother was murdered. “I raised my hands and said, ‘My G-d, of all people, why her? She was a wonderful human being who had so much compassion and love for others—why her?’”
Rabbi Moshe Herson, Dean of the Rabbinical College of America situated on the David T. Chase Campus, in Morristown, New Jersey, said “Mr. Chase, once one of the richest people in American, was a humble man. He never forgot his humble past and his people.”
A young teenager emerging as an orphan from the Holocaust, David felt that he’d either have to denounce his connection with G-d and become an atheist, or accept his limited understanding and continue believing in an unknowable G-d. But he learned faith from his mother, he said, who always told him to never question G-d’s will.
“I have never questioned the will and existence of G-d. It has become a source of strength, belief and commitment, and the result was that I became a better person for it,” he said in an interview for Dear Rebbe, published by Hasidic Archives.
In 1946 Mr. Chase immigrated to the United States and moved to Hartford, Connecticut where he completed high school, and began working at his first job. After class let out, he’d load his car with goods—pillowcases, sheets, and eventually mattresses—and drive to neighboring towns to peddle his goods. Fairly fluent in several Slavic, he could communicate with many customers and became successful. “On weekends, when I didn’t peddle goods, I was washing and scrubbing floors.”
By 1952 he established Chase Enterprises, then a real estate development and construction concern. He oversaw the development and construction of many shopping centers, office buildings, residential and industrial complexes. A leader of the discount store trend, he was instrumental in the opening of stores for retailers such as Zayres, Food Mart, G.E. Madison, Topps and others. This led him to purchase the Kresge Department Stores, based out of Newark, in 1964, which is where the then young Chabad emissary, Rabbi Moshe Herson, met him.
Mr. Chase warmed quickly to Rabbi Herson. “He became my good buddy, like my brother,” Chase said in a 2008 inteview with JEM. “Rabbi Herson was running a Chabad school in a poor area of Newark, and he was in desperate need of finanacial help.” Rabbi Herson embraced his cause with great vigor, lending his office and utilizing his personal staff for the institution’s affairs. When the search was on for a new college building in 1968, Mr. Chase took a leading role on the board, donating the equivalent of $1 million for the down payment of a sprawling campus in the scenic Morristown location, home to the college to this day.
At the time many of the supporters of the small yeshivah in Newark, then housed in a single family house, thought that the Morristown campus was way too large to ever be fully utilized. But the Rebbe told Mr. Chase that the campus will serve as a model not only for institutions in Newark, Morristown and New Jersey, but for instutions across the globe.
Today, the Chase Campus includes an elementary school, a school for higher education, a school for beginners to Judaism and a rabbinical ordination program. The college has since expanded.
“The future of Judaism is with Chabad,” the ever private man would say, boasting that the schools in Morristown had alumni who served as Chabad representatives across the globe.
The philanthropist shared a very close relationship with the Rebbe. He recalled a private audience with the Rebbe, during which the Rebbe told Mr. Chase that a human being is like an engine: if overused, it can burn out; but if underused, it gets sluggish. Mr. Chase held this lesson for life, and told the Rebbe that this inspired him to “work with the best efficiency.”
The philanthropist often said that he learned charity from his mother who would bring Challah bread every week before Shabbat to the town’s poor. An astute businessman, Mr. Chase would ask many questions before committing his funds to a program. But, says Rabbi Herson, “Once he pledged, his word was like gold; you never had to ask again and when you came to him, he never made you feel like a beggar.”
Mr. Chase would go to meetings to encourage business people to support the Rabbinical College and when there was an issue, he would make phone calls to resolve issue. “He was the father of the institution,” says Rabbi Herson.“There was no issue that we mentioned to him that he felt was below his dignity to be involved in.

Mr. Chase is survived by his wife Rhoda, his children Arnold and Sherrill, grandchildren and great grandchildren.
“I find solace in knowing that the David T. Chase Campus, which he established and was so dear to him, will be his true headstone and will bring his soul much nachas,” Rabbi Herson told lubavitch.com.