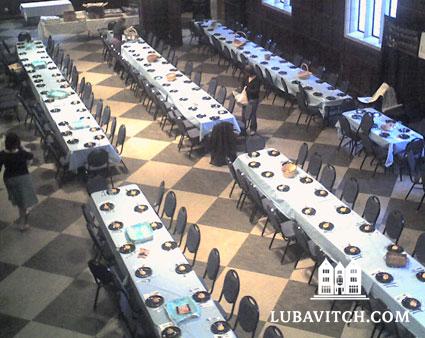 All News
By Ted Koutsoubas

(The Daily Pennsylvanian) The Penn Democrats and the Penn College Republicans broke bread and ate traditional Shabbat food together at the Lubavitch House last Friday evening.

The gathering was part of the Lubavitch House's fifth-annual Unity Dinner and was co-sponsored by the Penn Democrats, the College Republicans and Penn Israel Coalition.

The first Unity Dinner was held one week before the congressional and presidential elections of 2004 in an attempt to bring people from opposite ends of the political spectrum together after the tough campaign, said Rabbi Levi Haskelevich, co-director of programs and education at the Lubavitch House.

"The dinner is an opportunity," said former PIC President and College junior Alex Leavy. "It's a way to discuss politics, to celebrate Shabbat, and an opportunity to engage with the other side."

The dinner, which was held this year in honor of graduate student Me'eeyr Krawcheck's birthday, began with a traditional Shabbat prayer and included food and drink ranging from grape juice and wine to hummus, fish and chicken.

"It's a very interesting experience," said Wharton sophomore and Penn Democrats Vice President Mike Stratton commenting on his first Shabbat dinner. "I'm from an area of the country where Judaism is not practiced widely."

College sophomore and Undergraduate Assembly member Alec Webley said, "I think it a nice way to have a dinner conversation with people you don't agree with."

The topics of discussion in the room ranged from the UA survey and priorities to international and American politics.

Levine presented a biblical example from Moses about unity and coalitions. "In order to be effective, you need a coalition," said Levine. "It takes more than one party to solve the issues."

Byer echoed those sentiments and highlighted some of the College Republicans' specific accomplishments this past semester.

"Be proud of your identity," he added, "because without identity, there is no freedom."

Nechama Haskelevich, co-director of programs and education at Lubavitch House, explained that the purpose of the organization is "to explore and to celebrate" different cultures.

And according to Levi Haskelevich, the Unity Dinner is an example of just that.

"We need to dig deep within ourselves to find unity," he said. "We are all spiritual brothers and sisters."