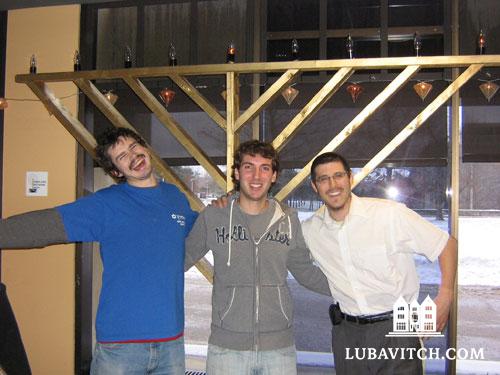 (lubavitch.com) Chemistry major Lenny Breindel has a hard time believing that nearly one of out of every eight of the 8000 SUNY Oswego students in upstate New York is Jewish.

“On campus, many Jews will not identify themselves as Jewish,” said Breindel. “Many of them grew up upstate, the only Jewish family in town. They don’t like to publicize the fact that they are different.”

Turning up the volume on Jewish pride and knowledge on the rural campus, a pebble’s throw away from cobalt blue Lake Ontario, is why Rabbi Yossi and Chana Madvig, recipients of a Rohr Family Foundation grant, moved upstate in October. But given their backgrounds, their life’s calling is a path few would have figured upon.

Chana Madvig was raised in a faithful non-Jewish home. Her path to becoming a Jew by choice began when a mysterious illness struck her as a girl, leaving her unable to walk or talk. When she regained the power of speech and movement, Chana began searching for a way to thank G-d for blessing her with health. “I realized Judaism was the way I wanted to express my spirituality,” she told Lubavitch.com.

A talk with the Chabad rabbi at her university, Rensselaer Polytechnic Institute in Troy, NY, cleared up misconceptions about Judaism. “I thought you had to be born Orthodox,” she said, and began years of study for her conversion.

Intimate knowledge of the wider world, beyond the conventional Jewish upbringing, helps Mrs. Madvig understand where students are coming from. But it’s her degree in biomedical engineering that helped Breindel. He was floundering in Physics. Then Mrs. Madvig, who spends several hours a night working as a programmer for a fuel cell battery company, tutored him. He finished with a B+.

Should he have needed help with biology Breindel could have turned to Rabbi Madvig. After a boyhood in the sunny southern California suburb of Chatsworth, Rabbi Madvig studied biology at UCSD. His interest in spiritual matters led him to a degree in religion, followed by a half-decade at Chabad’s Rabbinical College of America.

They arrived in Oswego at the urging of an incoming SUNY student, who mentioned his desire to have a Chabad on campus while he was attending Ivy League, a Chabad-sponsored summer study program for college students in New York. The Madvigs were actively searching for a campus to serve, and Oswego sounded just right.

Things came together quickly, and the Madvigs moved into their house six weeks before their second child was due. Soon to be born Menachem Mendel had other plans.

Three days after the Madvigs moving van rumbled to a halt in Oswego, Mrs. Madvig went into labor and they were desperate for someone to watch their toddler, Chaim Avrohom. They phoned the only person they knew in town, a student in a leadership position at the SUNY Hillel. Bonding quickly, because of the urgent situation, she hurried over to baby sit.

“She became one of our closest friends,” said Mrs. Madvig. “It’s just one of the many blessings baby Menachem Mendel has brought us.”
Menachem Mendel’s bris also gave the Madvigs one of their first headlines in the local paper, the Post Standard.  Oswego hadn’t seen a bris for dozens of years, and so Menachem Mendel was on page one. Good news making headlines, being on first name terms with the local photojournalist are among the perks of living in a small town, Rabbi Madvig said.

More significant benefits of serving a small Jewish campus community are the close relationships they develop with the students. “You really get to know them, their families, and you feel like you can think of programs specifically for them,” said Mrs. Madvig.

One of the ideas that grew out of the Madvigs’ focus on microprogramming is “VIP Shabbat.” One student is selected per VIP Shabbat to be the center of attention. Their favorite food is cooked as the main course. (Tofu, chicken fricassee, and fried chicken have been some of the requested Shabbat dinner entrees.) They are encouraged to bring friends, and receive star treatment during the meal. Several VIPs and their guests have become Shabbat meal regulars at the Madvig’s.

Students come for more than the fricassee, they come to Chabad because they feel comfortable with the Madvigs, said Dr. Steven E. Abraham, faculty advisor for the Chabad Student Club. They “never make anyone feel bad about the fact that they are not observant enough,” said Dr. Abraham, a professor at the school of business. “I hope they keep doing what they’ve been doing. They provide an opportunity for Jewish expression.”

The Madvigs are not content to keep their programs at status quo. They are planning to start Fall semester with a blast. They will be setting up a Shofar making factory, a complete hands-on experience for students, in the middle of the quad. They are planning Rosh Hashanah services that will be heavy on explanation and song and light on mindless page turning.

Before all that happens, though, the Madvigs will be on campus as students move in, lending a hand wherever they can as students settle into their dorms. Mrs. Madvig said it’s part of their unexpected calling, “Wherever students need us, Jewish or not Jewish – it doesn’t matter – we’re here to help.”