Oslo’s Jews Dance in the Streets, Hoping for Better Days Ahead 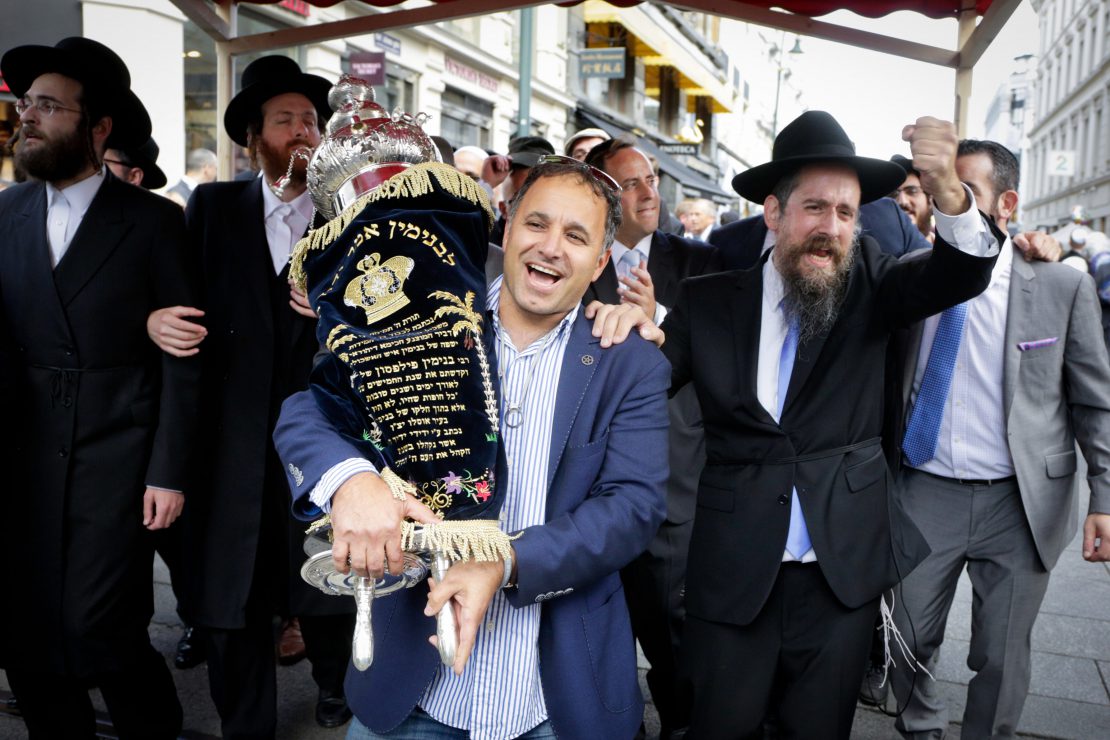 Mr. Chaim Hirsch (Hermann) Kahn, one of the oldest Jews in Oslo, rubbed his eyes in disbelief last week. “I have been living here for the last 70 years and never believed that in my lifetime I would witness what I saw today.”

Life experience taught the Hungarian-born Holocaust survivor to keep a low profile. Especially in places like Norway where, as is true in many Scandinavian countries, Jews have not found a comfort level allowing them open expressions of their identity. To dance with a Torah in the streets of Oslo seemed more than farfetched.

It’s a vibe that Rabbi Shaul and Esther Wilhelm have been working hard to change, and when they got word that a new Torah would be donated to their city’s Chabad House, they saw opportunity. The Chabad representatives would invite the community to celebrate it with all the pomp and circumstance typical of Torah dedication ceremonies in the U.S. For Oslo’s very small Jewish community, the event was happy evidence that, thanks to the bold efforts of their Chabad representatives, positive change is astir.

On August 30th, as locals looked on in antcipation, the scribe filled in the last letters of the Torah. Carried under the traditional chuppah canopy, the new Torah was hoisted up as 250 Jews brandishing flags and balloons danced down Oslo’s main street to lively Jewish music.

The procession marched past Parliament’s Storting building and ended outside the Grand Hotel, where Rabbi Wilhelm reflected on the dramatic turn of events: 70 years earlier, he noted, ships deporting Jews to Auschwitz left from the harbor at the Oslo Fjord that lies only a few minutes away from the Grand Hotel.

“The Lubavitcher Rebbe emphasized the importance of being comfortable in one’s own skin and showing no fear. We took this message to heart and displayed our Jewish pride boldly, showing that we can live as Jews no matter where we are,” declared Rabbi Wilhelm.

One donor, who asked to remain anonymous, expressed a similar sentiment. “It was the biggest kiddush Hashem I’ve ever seen,” he shared. “It really changed the community. Ever since the war, people have been afraid to express Yiddishkeit in Oslo. Now, to see Jewish people walking the street so proud and fearless . . . it’s an amazing thing.”

The event was followed by an elegant sit-down dinner for 450 at the Grand Hotel’s ballroom, where the annual Nobel Peace Prize banquet takes place. Rabbi Wilhelm supervised the koshering of the hotel’s kitchens for the occasion, and a team of chefs was flown in from New York.

Capping the drama, the Wilhelms announced the purchase of a new property for the Chabad House. The dedication of a Torah scroll, a fitting introduction to the establishment of Oslo’s new Chabad House, seemed to beckon better times for the city’s Jewish community.