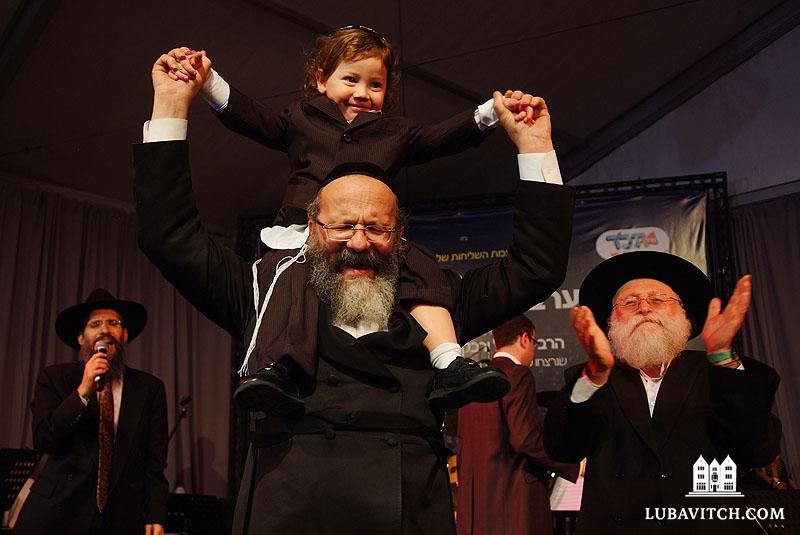 (lubavitch.com) Moshe Zvi Holtzberg  entered the party tent in Kfar Chabad, Israel, escorted by his two grandmothers and his nursemaid Sandra Samuel.  Although the evening’s emcee had warned the large audience that a three-year old might easily be crowd-shy, he smiled as he climbed up on a Victorian couch to get his first haircut.

Moshe’s grandfathers Nachman Holtzberg and Shimon Rosenberg each cut a curl from Moshe’s shoulder-length auburn hair, followed by a line-up of distinguished Israeli Rabbis and public figures. The three-year old boy stood quietly, accepting miniature chocolate bars from the bearded rabbis as they snipped his locks. At last, when Grandfather Holtzberg swept him into his arms, he laughed.

Conspicuously absent from the celebration were Moshe’s late parents, Rivkah and Gavriel Holtzberg. Terrorists murdered them one year earlier in Mumbai, India where they were serving as outreach emissaries of the Chabad movement.  Samuel rescued Moshe, extricating him from the community center attacked by the terrorists.

The ceremonial haircut is a Jewish custom called called the upsherin. It marked Moshe’s third birthday, a traditional time for children to begin Jewish education and to start wearing religious garments. At his haircutting, Moshe was already  wearing the knotted white ritual fringes, hanging below the knees of his dark dress suit, and a yarmulke embroidered with his name.
Over 2000 men and women gathered in separate sections of the tent at dinner tables set with flowers and candelabras. They came from Israel and abroad to take part in this bittersweet  combination of celebration and  memorial. The evening was also dedicated to saluting the lifework of Chabad emissaries like the Holtzbergs who create welcoming Jewish resource centers offering kosher food, Jewish education and friendship around the world.

At least a quarter of the guests were Israel-based emissaries who run the 257 Chabad Houses in Israel. Others included friends, supporters and Israeli travelers to India who had benefited from the Holtzbergs’ hospitality and help. Among them was Ronen Dewash, 37, an Israeli who allegedly escaped from an Indian prison where Gavriel Holtzberg frequently visited him.

“Gabi inspired me to become a different person,” said Dewash who now lectures to Israeli teenagers about the dangers of extended travel and drugs.
Rabbi Rosenberg, Rivkah’s father, reminded the guests that the evening was above all a thanksgiving meal for the rescue of Moshe. He and Rabbi Holtzberg, Gavriel’s father, publicly thanked Samuel for her courageous rescue of their grandson and lauded her righteousness.
“Moshe was both a witness to the events in Mumbai and rescued from the fire,” said Rabbi Holtzberg. “It was a Divine wish that he was the only one saved.”  He expressed his hope that that his grandson Moshe would grow up to be an emissary like his parents, and one day take up their unfinished work in Mumbai.
The difficult year of family mourning which recently ended was also marked with extraordinary kindnesses and good deeds, insisted Rabbi Holtzberg. “Gavriel and Rivkah brought Redemption to the world by inspiring us to be united. Over 500 children have been named for them, many institutions, and thousands upon thousands of private acts of goodness have been inspired by and dedicated to their memory.”
Rabbi Rosenberg  also announced the anticipated opening of the Good Deed Inn, an educational and hospitality center in Afula to be created in the slain young couple’s memory.  It will include activities for special-needs children and also serve as a stopping off place for Israelis on their way to hiking trips in Israel’s north.
The evening began with the public recitation of memorial psalms for the Holtzbergs and the other victims murdered in Mumbai. It ended with festive Chasidic line dancing with  Moshe riding high on his grandfathers’ shoulders. Leading religious entertainer Avraham Fried performed a new memorial song “They Walked Together” based on the Biblical verse referring to Abraham’s binding of Isaac.
“Memorial ceremonies are usually thought to elevate the souls of the departed,” said Moshe’s great uncle, Rabbi Yitzhak Grossman who heads the Midgal Ohr network of educational Institutions, “But Rivkah and Gavriel have elevated our souls tonight.”

Barbara Sofer is a columnist for the Jerusalem Post