The Art of Connecting With Students At UNLV 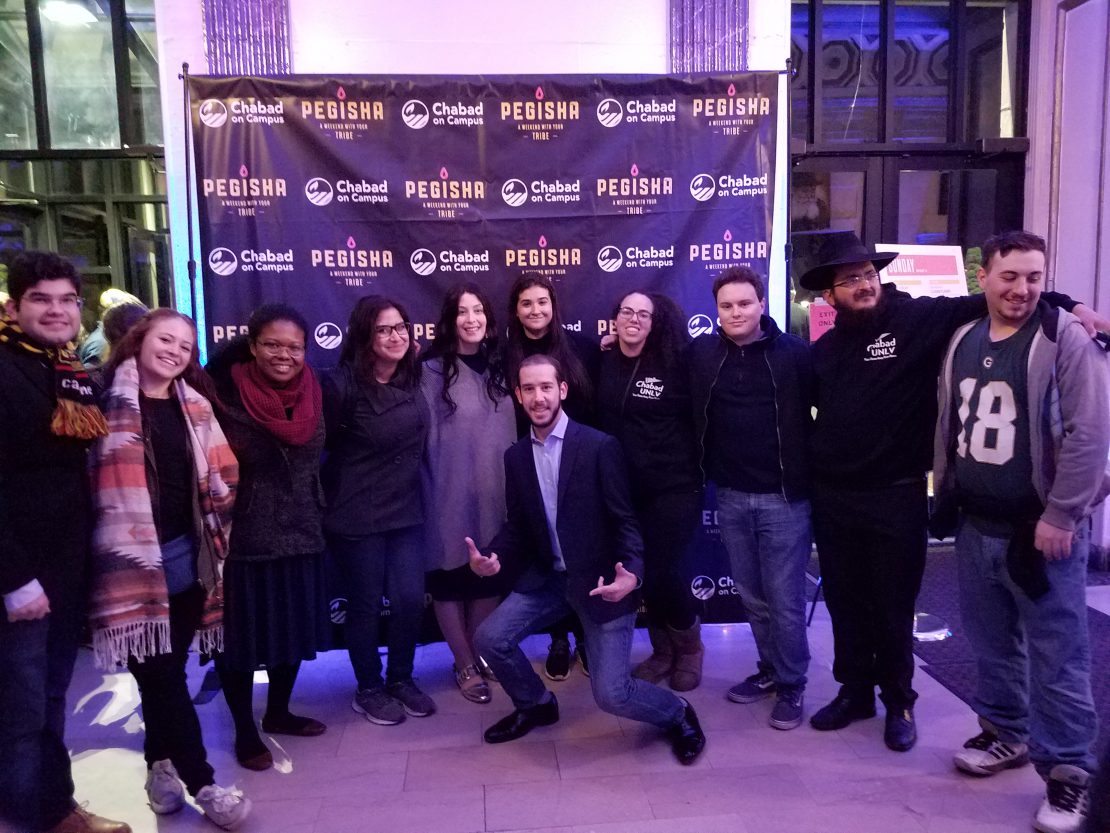 UNLV Students at the Pegisha Campus Shabbaton in New York

Merav Gedalia, a senior at the University of Nevada, Las Vegas, recalls the circumstances that brought her to Chabad. She was accepted to the university three weeks before the start of the new semester, but two days before orientation, her housing options had fallen through. “I reached out to different people, different organizations for help. Rivky got back to me first.”

Rivky Bronchtain and her husband Rabbi Tzvi, who serve as Chabad’s representatives at UNLV, hosted Gedalia for ten days. She ultimately found independent housing, but her home at Chabad has remained a constant throughout her college tenure. “If not for staying with them,” Gedalia says, “it would have taken months before I would have been ready to check Chabad out.”

Drawing in new students is one of the couple’s biggest challenges on this vast commuter campus, where everyone is always running to a test, a class, a job. UNLV competes with Cornell as the premier hospitality college in the country, attracting students from around the world to its top-tier program. The Bronchtains go to great lengths to connect personally with each of the school’s 1,000 Jewish students.

“Making that initial connection is one of our greatest challenges,” Rivky says. “Students put their headphones in, stare at their cell phones, and walk right by us. But I don’t think it’s Judaism necessarily that they are avoiding: the University struggles to engage them also. I think this generation is looking for connections but needs help actually connecting.”

There’s also the matter of apathy, her husband adds. “Judaism, the Holocaust, Israel, they don’t speak to today’s youth as they did in the past.”

“In a way,” Rabbi Bronchtain says, tongue-in-cheek, “it would be easier to interact with pro-BDS students,” referring to students active in the Boycott, Divestment, Sanctions movement that condemns Israel’s treatment of the Palestinians. “They are at least engaged in something.”

If the indifference is at all discouraging, the Chabad reps aren’t showing it. Instead, they constantly innovate to form and maintain relationships.

When students moved onto campus in late August, the couple greeted them with tasty breakfast packages and a nifty business-card size calendar of the upcoming Jewish holidays. Gedalia and other students helped Rivky create a colorful “What to expect at Chabad” pamphlet as well. The brochure illustrates Chabad’s diverse participants, emphasizes that background knowledge is not necessary, and stresses that the organization is there to allow students to “experience Judaism the way they want to,” says Gedalia.

“It can be scary for students to be approached by a stranger and invited for dinner,” Gedalia explains of Friday night or holiday invites. “I don’t know you. You don’t know me. Why should I come?”

The Bronchtains have figured out how to turn Rosh Hashanah dinner, the first big holiday event of the year, into a hot invite. In a popular tradition here, students vie for the chance to bring foods with symbolic play on words. Over figs (“getting it all FIGured out) and prunes (“having our shortcomings be PRUNEd”) and currants (“debts should be CURRENT”) and corn (“the coming year should be a CORNucopia of blessing”) some sixty diners forge new friendships and both explore and affirm their own Jewish identities.

Dinner is one thing, services another. “When we first came to campus in 2005, it was almost unheard of for students to attend classes on Rosh Hashanah and Yom Kippur,” says the rabbi. “Now, they’re telling us that they can’t miss class or they are worried about falling behind.” Though university code mandates that the school and professors must accommodate students’ religious needs, more are choosing the MacBook over the prayerbook.

No matter. If the students won’t come to synagogue, the services will come to them. Before and after the scheduled minyan, Bronchtain sounds the shofar in the Student Union. All afternoon, he strolls the campus, ram’s horn in hand, tooting 100 blows for interested students. A welcoming table, groaning with apples and honey cake, sits at the center of campus, a magnetic lure to hungry passersby. 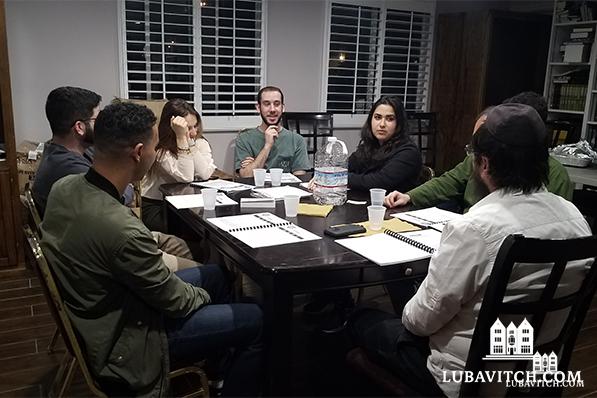 Rabbi Bronchtain teaches a Torah class for students at UNLV

Liam Kalson first saw Chabad’s table during college orientation last year. It took awhile for him to attend one of their programs. “I wasn’t looking for something Jewish on campus,” he says, “I guess I wasn’t really thinking about getting involved.” Now, the music performance major spends almost every Shabbat with the Bronchtains in their new Rohr Chabad House at the Alevy Center for Jewish Life. The Chabad outpost was built with four extra bedrooms for students to sleep over. For commuters like Kalson, now a sophomore, it allows for late afternoon Friday classes without sacrificing Shabbat. It’s also a chance to play board games, engage in group or personal study, and deepen relationships with friends in a Shabbat-friendly space. Since meeting the Bronchtains and learning more about Judaism, Kalson has committed to Shabbat and kosher observance.

“Spending time with other Jews is important to me. It strengthens my faith and identity as a Jew,” Kalson explains. “Studying Talmud and Torah adds a lot to my life. If I was just involved with school work, I would be missing out.”

Both the rabbi and Rivky meet one-on-one with students offering to talk or study the subject of their choosing. One girl asked Rivky to teach her to read Hebrew, another wanted to learn how to read Rashi script. Sitting together in the library or local coffee shop, conversations then unfold and meander into topics like the intricacies of keeping kosher and other Jewish practices. “Like everything,” says Rivky, “it’s so individualized.” She offers a weekly exercise class—Krav Maga is on the docket this semester—that combines a short class with a vigorous workout. “Hebrew School Drop-Out Dinner” (where all topics are fair game), pottery design, and Henna and Havdalah are all popular events on the calendar.

“When we first came, Facebook was still private. ‘What is this? A book of faces?’ we wondered,” Rivky recalls. They utilize it now, alongside Instagram and other social media platforms. Still, it’s the personal invite, the text, the greeting on campus, they have found, that has the most impact. Not to mention, of course, students inviting along their unaffiliated friends. “We offer double dessert on Shabbat for students who bring a friend,” laughs the rabbi. “If someone in their social circle is already engaged, it is much more likely for the new student to be interested in coming. Students are our best ambassadors.”

“The best way to overcome apathy is with originality,” posits Joel Finkielsztein who began his educational trajectory at UNLV, but left last year to join the IDF. “If you grew up Conservative or especially Reform the idea of spending what little free time you have with Chasidic Jews isn’t exactly the first thing that comes to mind.” Ultimately, “what drew me in was the idea of social activities with college students my age of the same background. I was lonely and bored.”

The secret to success? Finkielsztein believes it’s all in the approach. “You have to find a way to make people feel like they won’t be judged. Stress acceptance and non-judgement. Create unique, fun social events.”

Gail Chernomorets was on campus for three years before discovering Chabad. One day, she stumbled onto Rivky’s Instagram and “liked” one of her pictures. When Rivky reached out, Chernomorets asked where to buy a challah. Rivky told her where to procure kosher bread and offered to make a batch with her one Thursday night. It was a whole year before Chernomorets took her up on the offer. 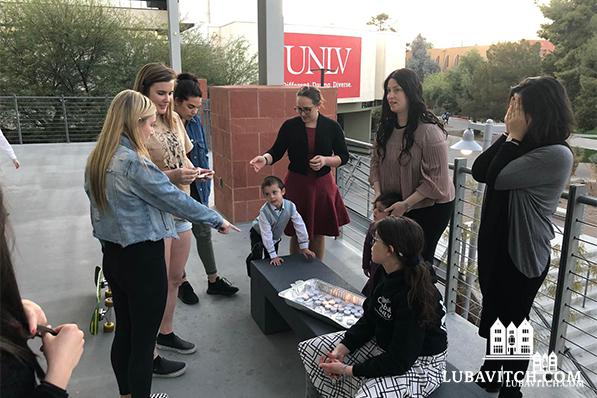 “I was raised Reform and throughout my life I strayed away from my religion and culture,” says Chernomorets. “Getting involved with Chabad has brought me back to it and I have become more connected to my faith, which helped me learn more about myself throughout the process.”

These days, Gedalia and Chernomorets serve as co-presidents of Chabad, encouraging their peers to try Judaism for themselves. “Our Chabad is our home away from home for students,” says Chernomorets. “It’s a place to come and be surrounded by friends and those who become like your family so you never feel like you’re alone, especially in a city like Las Vegas.”

“We’re just trying to get people a little more involved, a little more in touch with their Jewish selves,” Gedalia says. “When the students look at me and see that I attend, it’s easier for them to try it out too. One student, one day at a time.”

This article was featured in Lubavitch International, Summer 2019. To order your copy, visit www.lubavitch.com/subscription