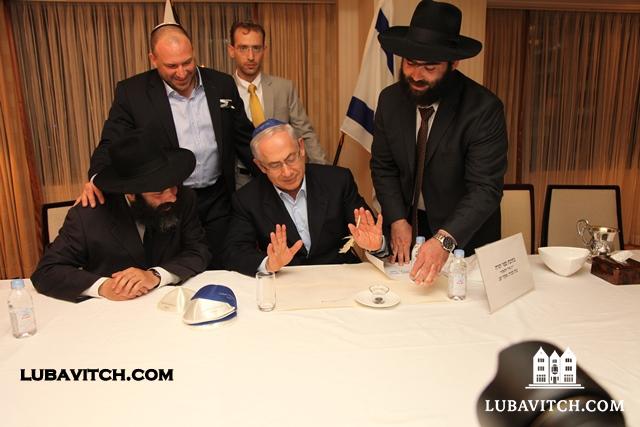 During his recent visit to Japan–the first in 17 years–Israeli Prime Minister Benjamin Netanyahu met the Emperor of Japan, Japanese Prime Minister Shinzo Abe, and various heads of industry and ministers of state. He met as well with Chabad Lubavitch representatives, Rabbi Mendi Sudakevitch, head Chabad emissary to Japan and Director of Chabad of Tokyo and Rabbi Shmulik Vishedski, Director of Chabad of Kobe.

The nearly hour-long meeting took place at Netanyahu’s room at the Imperial Hotel in Tokyo. During the course of the conversation, Netanyahu ‘purchased’ two of the first letters to be written in a Torah scroll currently being written for Chabad of Japan.

When asked about the inspiration he draws upon for his leadership, Netanyahu spoke of his encounters with notable Jews around the world, “and the constant reminder of the Rebbe’s words [to me], that the light [of this special mission] dispels the darkness of the world.”

Chabad of Japan served as the official caterer for Netanyahu’s staff as well as for all official meetings, including those held with the Prime Minister of Japan.