On Stem Cell and Other Matters: A Conference Explores the Torah-Science Nexus 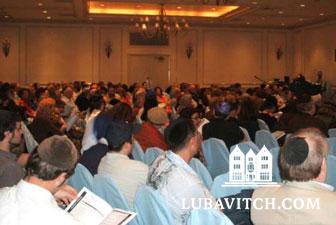 At one of the lectures.

Is Judaism’s belief in free will compatible with concepts of genetic predestination? Are there links between contemporary neuroscience and Kabbalistic concepts of consciousness? How does biblical Creation relate to evolutionary theory?
These were among some of the questions addressed at The Seventh Miami International Torah and Science Conference on December 12-15, at The Shul in Bal Harbour, Florida.
During the three-day conference, professors from diverse fields in the sciences and humanities discussed contemporary controversial religious/scientific issues.
Among them, Professor Abraham Steinberg, an associate clinical professor of medical ethics at the Hebrew University-Hadassah Medical School and a pediatric neurologist at the Shaare Zedek Medical Center in Jerusalem, explored halahkic issues regarding stem cell research in his keynote address: Stem Cell Research—Scientific, Ethical and Jewish Legal Aspects.
Chabad representative, Sholom D. Lipskar, Rabbi of The Shul, delivered a talk on “G-d and Creation: Immanence and Transcendence – The Kabbalistic and Maimonidean Models.”
Also among the presenters were Yakir Kaufman, M.D., a neurologist from Herzog Memorial Hospital and Hebrew University Medical School in Jerusalem, addressed “Practical Applications of Soul-Body Health and Faith.” Professor Eduardo Zeiger, a biologist from UCLA and long time presenter at the Torah and Science Conference, on “How to Teach Torah and Science as One”; Professor Isaac Elishakoff, a mechanical engineer from Florida Atlantic University on “The Mathematics of Fair Division in the Mishnah”; and Professor Vera Schwarcz, a historian from Wesleyan University, on “Truth Consciousness: Inner Landscapes of Authenticity in Jewish and Chinese Traditions.”
The conference counted 850 participants comprised of local as well as out-of-state and out-of-the-country individuals. High school and college students also attended many of the conference’s sessions.
With an atmosphere conducive to easy interfacing and exchanges between lecturers and guests, the event was characterized by a lively exchange of ideas between guests and presenters, who also shared a Shabbat dinner at The Shul.
The Miami International Torah & Science Conference is generally scheduled on or around Chanukah because of its association with light. According to the Lubavitcher Rebbe, himself a scientist, Einstein’s research, which led to his theory of relativity, was from its inception connected with the nature of light. As physical light provides an absolute measure to the physical world, so too, in the spiritual realm, does the light of Torah provide the Jewish people with an absolute standard.