On State Dept. Missions, Nuclear Scientist Checks in With Chabad 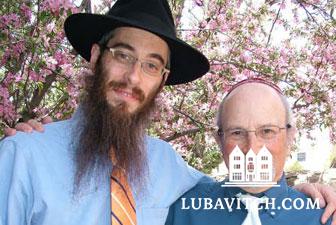 His travels are related to preoccupying concerns of international political leaders, but this nuclear scientist says that it's his encounters with Chabad around the world that inspire him in his travels.

(lubavitch.com) Steven Gitomer’s State Department funded missions to prevent nuclear scientists from selling their knowledge to rogue states takes him to distant outposts of the former Soviet Union. Whether his plane lands in Azerbaijan, Ukraine, Moldova, or Russia, Gitomer makes a point of spending Shabbat with Chabad.

Although he says he does not himself observe Shabbat, the retired Los Alamos scientist who is now a senior science advisor to the State Department, makes it his business to seek out Chabad wherever he goes.

“It is a great credit to the Chabad movement that there are rabbis and rebbetzins who settle their families in remote places and bring Yiddishkeit to folks there,” said Gitomer.

Internationally themed Shabbat dinners, introduced this year by Rabbi Berel and Devorah Levertov, directors of Chabad, have drawn crowds to the synagogue and brought the community together.

Tales of Gitomer’s experiences, which he previewed to Lubavitch.com, range from the harrowing and poignant to the “only at Chabad” variety.  A weeklong visit in the predominantly Muslim country of Azerbaijan found him in Baku.

“I wasn’t sure I should tell the scientists that I was Jewish, but that was not going to keep me from finding Chabad,” he said. On another trip, this time to Moscow, Gitomer put on tefillin for the first time since his bar mitzvah year.

But it was a trip to Moldova that gave Steven and his wife Joyce a firsthand look at the close-knit character of the Chabad worldwide network. Before Shabbat, Joyce showed Chabad’s representative in Kishinev, Rabbi Zalmen Abelsky, a photo of Rabbi Levertov, and the rabbi’s “eyes were shining,” said Joyce Gitomer. Turns out Rabbi Levertov’s father and Rabbi Abelsky were childhood chums in communist Russia.

For Santa Fe’s Jewish community, moments like these make Chabad’s international Shabbat dinners a precious opportunity. Santa Fe’s Jews can feel isolated. The Jewish population is around 5,000 out of 70,000 residents. There are no kosher restaurants or Judaica stores dotting the landscape. Over the past few months, community members warmed to the speakers at Chabad's Shabbat dinners who described Jewish communities in Iraq, France, Columbia and Brazil, giving them the feeling that “we are part of a greater whole Jewish community."

"Wherever we go, we can and feel at home.”

Perhaps that's what makes Gitomer, a  Santa Fe resident, seek out Chabad on his worldwide travels. Santa Fe regularly wins spots on magazine top ten lists of “places to reinvent yourself, “art destination” and “healthiest city.” Its climate, artsy sensibility and cultural life inspire people to pick up and move there.

But there's a price they pay.

Abandoning home communities, former identities and family ties may bring the joys of a fresh start, but with it too, come pangs of feeling just a little bit lost. At Chabad Shabbat dinners, as community members describe their travels, their native countries and early memories, they share a deeper piece of themselves with each other.

“It is interesting because you get a glimpse into what made people tick when they were young,” said Prof. Steve Hochberg, a retired law professor and former civil court judge. He and wife Jane Hochberg will be featured speakers at June’s dinner. The Hochbergs have traveled to 187 sovereign countries and chose Cuba’s Jewish community as their topic.

With an eclectic mix of Jewish people living in the Santa Fe area, Rabbi Levertov does not need to go far when choosing a guest speaker. The Gitomers are affiliated with a local Reform congregation but have been drawn to Chabad and the opportunities the Levertovs bring to the local community, for the spiritual growth they offer, says Joyce.

While his travels are related to preoccupying concerns of international political leaders, this nuclear scientist says that it's his encounters with Chabad around the world that will inspire his presentation at Santa Fe's International Shabbat dinner.

“It is gratifying to see how Chabad-Lubavitch has spread Judaism where it was suppressed for so many years," he says.