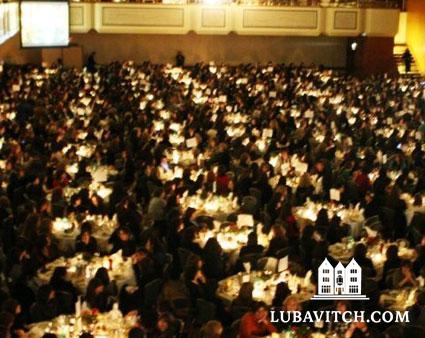 (lubavitch.com)  The International Conference of Shluchos (f. representatives) concluded Sunday at the gala banquet at the New York Hilton. As 2,900 women poured into the hotel, they greeted old friends and relatives warmly. And at each person’s place, the joyful faces of Rabbi Gavriel and Mrs. Rivkah Holtzberg, adorning the latest issue of Lubavitch International, smiled up at them.

It was this dichotomy of success and challenge, of happiness and despondency, which served so fittingly as the evening’s backdrop. And it is this contrast, after all, that shapes the current reality of every Chabad representative in every locale. Rabbi Moshe Kotlarsky, director of the Conference, told attendees, “that in the face of adversity, we can only go forward with greater strength.” The vice chairman of the Lubavitch educational division acknowledged the global challenge, but said, “we will stand strong and stronger than strong. And we will do so with joy.”

“It is not that we are not affected by the worst financial crisis,” explained Rabbi Yehuda Krinsky, chairman of the educational and social services divisions of Lubavitch. “But Chabad is in the business of saving lives, and where Jewish life is at stake, cutabacks are not an option.” Krinsky challenged the large Jewish philanthropies, among them the UJC, to learn from Chabad’s successes. “We invite the leaders of the major Jewish philanthropic organizations to join hands with us.”

The energy flowing from table to table evidenced the fact that not one woman was considering slowing down. Though for one short night, the shluchos were not consumed with the need to prepare a lecture, whip up a gourmet meal, or counsel a college student, their vitality was ever-present. They chatted with lay leaders and colleagues, sharing stories of hardship and triumph that crossed all age and physical borders. It was, as many women expressed, a family gathering.

The banquet session closed the five day conference, a whirlwind of events that explored all aspects of the Jewish feminine experience and allowed lay leaders a closer look at the lives and roots of Chabad representatives on their home turf.

Eileen Bruskewitz, a County Board Supervisor in Dane County, Wisconsin, who took in as much as possible during her long weekend in Crown Heights, admits that perceptions of Chabad women are typically mistaken. "Women's roles are not really understood," she says. “These women have the benefit of an education that has taught them to think critically, and where others dwell on problems, they always seek out the positive options in every situation.”

Andrea Fram Plotkin, who hails from Riverdale was attending the banquet for the first time. “When I saw the sheer number of women coming up the escalator, I was stunned.” Plotkin, an associate director at the United Jewish Communities (UJC), says that for her, “the event is a testament to the power of women. Speaking different languages, hailing from remote places, many with babies in tow, this is the ultimate in women’s philanthropy. These women are giving of themselves to Jewish communities around the world.”
In her guest address, noted storyteller Devorah Telushkin, recognized the constant giving that characterizes the life of a Chabad representative. She shared her personal encounters with Rivky Holtzberg, when she and her husband traveled to India in a desperate attempt to convince their daughter Rebecca, to leave an ashram. Entering the Mumbai Chabad House was “like happening on a sunrise in the desert,” she described. The Holtzberg’s warmth lit up everything they did that weekend, and throughout their four years in Mumbai.

Mrs. Chanie Lifshitz, Chabad’s representative to Katmandu, Nepal, brought the audience to tears when she described the close bond she shared with her “twin soul and best friend,” Rivky. “You told me that we must detach our personal trials from our shlichut [mission],” Lifshitz cried to her friend. “You said that your shlichut fortifies you and allows you to overcome adversity.”

Surmounting hardship was a theme of Mrs. Fruma Posner’s address, as she discussed her 21 years in Birmingham, Alabama. Her strength, she said, comes from the Rebbe’s blessings she received in the year of hakhel, 1988. Hakhel, in ancient times, served as a spiritual rejuvenation for the coming seven years. For the weekend’s attendees, the conference provided them with the inspiration to return home, “to toil and sow.”

Having come to know Faygie Matusof, Chabad representative to Madison, her husband, Rabbi Yona, and a younger generation of Matusofs now serving at the University of Wisconsin at Madison, Eileen Bruskewitz says she's “found that Chabad couples exude a joy and a confidence. They make amazing teams, as they build their lives, their families, and their communities.”

In her closing words, Telushkin implored the shluchos to continue laying those bricks, and, referring to others like her daughter, who take their search for spirituality far away from Judaism and the Jewish way of life, she said:

“They are searching for truth, but they are not finding it in our synagogues and day schools. They are finding it with you. Our children need you. The Jewish people need you.”