On Campus with Chabad at UW: No Matzah Ball Soup Here 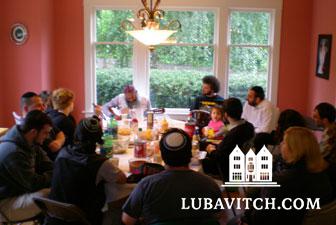 Students at Chabad of UW

Chabad on Campus at University of Washington has a new home, room for seventy guests on Shabbat dinner, a library and a joint project with a Jewish frat on campus coming up, but no matzah ball soup.

On Shabbat at the new center—a tall but cozy house, three quick blocks from U-Dub—Rabbi Elie and Chaya Rochel Estrin don’t serve “Jewish penicillin” or potato kugel either. Traditional Jewish foods, the mode of identification for gastronomic Jews in other eras and places, leave most Jewish UW students cold. The campus, in the statistical epicenter of the intermarriage epidemic, attracts students who – on the whole –  have grown up so far removed from anything Jewish that the standbys of Jewish culture are foreign to them.

“If we serve kugel, it just sits on the table uneaten. Students don’t know what to make of it,” said Rabbi Estrin.

Instead of mourning the demise of food as common ground for Jews from different backgrounds, the Estrins capitalize on it. Every month they offer a Friday night Shabbat meal based on a different international cuisine. Thai, Mexican, Chinese, Japanese, Cajun, and Italian cuisine have all been on the menu. Chaya Rochel has received so many requests for recipes that she hosts cooking lessons each week.

“Some of the biggest crowds are at the themed Shabbos dinners. It allows people who normally wouldn’t bother, to get involved with Judaism,” said Gary Stute, who recently graduated UW with a degree in physics.

Interest in the exotic Shabbat meals spills over into involvement in Chabad’s other events. Cosmopolitan menus also work because they mesh so nicely with the Jewish students’ interests. Of the 2000 self-identified Jews on campus, a hefty chunk of them are international studies or political science majors. Students’ investment in the issues of the day keeps discussions at the Estrins’ table lively.

The Estrins are “open to questions. It is an environment where people feel safe and secure to be themselves. Everyone feels comfortable,” said Stute.

At 1:30 AM, Shabbat morning, the Estrins’ children have been tucked into bed, and Chaya Rochel’s deftly spiced cuisine has been devoured. But the conversation is still bouncing around from the environment to goings on at AEPi to vegetarianism to the weekly Torah portion. Rabbi Estrin clearly enjoys the exchanges. “I get to spend time with good people and enjoy their company and have great conversations.”

Though the couple is new to formal Chabad on Campus work, which they began in 2004, both Estrins have backgrounds that have prepared them for their life among the Huskies. Chaya Rochel Estrin was born in Brooklyn, but grew up in Sharon, MA, and her parents now live in Cincinnati.  Rabbi Estrin was raised in Providence, RI. Most members of his extended family are proud but not practicing Jews.

“I had heard their opinions for so long, and their gripes about Judaism. From them, I learned how to approach questions. I can relate. It is not a foreign world.”