On Campus: Chabad’s Purim Bashes Draw In the Shy and Wary 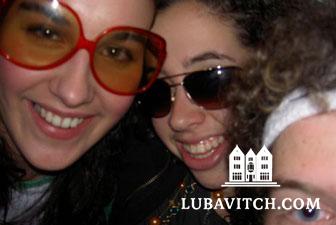 Purim, more than any other holiday, say Chabad-on-campus representatives, brings in crowds of students who otherwise keep a safe distance from anything that feels too Jewish. It’s the time of year to reach the unreachable, like Jewish students living in fraternity and sorority houses.

Fifteen percent of Jewish college students belong to a Jewish fraternity, according to the National Jewish Population Survey. Opting to socialize and live with fellow Jews, wearing classic Jewish frat – AEPi, ZBT – regalia, these students don’t shy from their Jewish identity, but they’re not necessarily joiners of Jewish activities either.

Rabbi Peretz and Chanie Chein, who direct the Chabad center that serves Brandeis University students, noticed that though students by the hundreds joined Purim parties sponsored by Jewish groups on campus, frat brothers and sorority sisters were mostly MIA.

“We came up with the idea of hosting a Greek house party at Chabad, and not a Chabad sponsored event that fraternities and sororities are invited to,” said Rabbi Chein. Students involved in Greek life on campus “were very enthusiastic about the idea.”

Out of the 300 to 400 who attended the Greek-run party, about 80% were first time Chabad center visitors. Because it took place at Chabad, the students had a chance to listen to the Purim scroll, megillah, being read and receive mishloach manot, food packages key to observing the holiday. The relationship didn’t end there. The Cheins were invited to start special Jewish studies “iLearn” classes in the fraternity and sorority houses.

Queen Esther, heroine of the Purim holiday, concealed her Jewish identity from her king until just the right moment, when unmasking the truth helped save her nation. As Purim arrives at college campuses across the nation, Chabad student centers are bringing out the fun side of revealing and reveling in one’s Jewish heritage.

It takes creativity to reach them with an offer to celebrate a holiday that’s significantly less known than the heavies – Rosh Hashanah, Yom Kippur and Passover.

At University of Connecticut, Chabad representatives Rabbi Shlomo and Shaindel Hecht have drawn capacity only crowds by smart advertising. To navigate the sprawling UConn campus, Huskies board a bus that loops around and around the buildings, giving them plenty of time to read the ads inside.  Mrs. Hecht’s father, a graphic artist, created Chabad’s ad using a silhouette of Rabbi Hecht dancing, hamantashen in hand. Right where it ought to say iPod, there’s an “iPurim” headline and a call to join the party.

“Religious Judaism can scare off many students,” said Mrs. Hecht. “So when we have an event that shows its fun side, we want students to know that we speak their language.”

Advertising, Facebook groups, flyers, email and the all important word of mouth draw larger crowds, and Chabad centers use them to let students know about the array of programs that await them all year through. This is especially important for new centers on campus.

It will be Rabbi Shmuly and Rashi Weiss’s first Purim at McGill. The couple arrived to direct Chabad Student Centre of McGill five months ago, “it’s been quite a lot of action ever since,” said Rabbi Weiss. Their first Shabbat dinner brought ten people and now they squeeze in 80 around their tables.

They hurried to complete the new student lounge, totally hooked up with wireless internet, study nooks, comfy couches, foosball and a pool table in time for Purim.

“A lot of students who are not regulars at Chabad are coming to the Purim party and meal. It’s a way for us to get word out about Chabad. For studying – for midterms or Jewish classes – there’s a Jewish place to hang out, and just be yourself, on campus.”