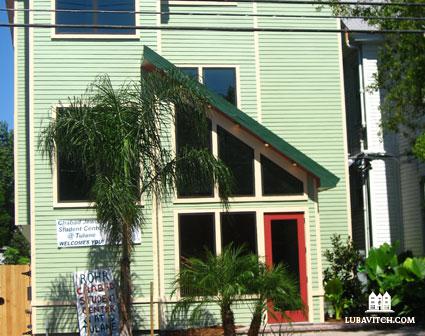 All Photos
Go to Article
On Campus: After Katrina, Chabad Builds New Student Center At Tulane

Two years after Hurricane Katrina put Chabad of Tulane’s plans for expansion on hold indefinitely, a new 6,000 square foot Rohr Chabad Student Center, with all the comforts of home, opened on the New Orleans campus.

Chabad House directors Rabbi Yochanan and Sarah Rivkin expect the new center to draw more of Tulane’s Jewish population, a hefty 20-30% of the 10,600 total students. And with Tulane’s enrollment up 55% over last year, the center’s opening coincides with a sure surge in demand.

Building under post-Katrina conditions proved challenging. Construction had to wait until authorities, wary of repeating mistakes that left their city underwater, arrived on new construction standards. To qualify for site insurance, the building had to be raised a foot higher than planned, even though the land upon which the new center was built did not flood. Requirements, like hurricane resistant glass, were unfamiliar to contractors and difficult to source.

Even when those hurdles were cleared, more sprung up. Across New Orleans construction workers are in high demand, free to charge outrageous prices. Because the area’s water pressure is still not up to pre-Katrina levels, Chabad’s fire sprinkler system couldn’t function on city water. Chabad installed its own water pump to cover the pressure gap. “It’s been a roller coaster ride building under these circumstances,” said Sarah Rivkin.

Chabad received the all-important Certificate of Occupancy at 4 p.m. on the Friday before Rosh Hashanah and held its first Shabbat dinner there that evening. Tuesday night, right before the holiday celebrating the New Year began, a group of students pitched in to help Sarah Rivkin prepare holiday meals well into the night.

Whitney Silverman of Vernon Hills, IL, a senior at Tulane, was on potato peeling duty. As the slithery slivers of potato pulp piled up, Whitney counted up the refrigerators – four, ovens – four, and industrial sized sinks – three, in the center’s new kitchen. “It’s so conducive to massive cooking projects,” she said.

She noted the practical touches throughout the kitchen, like the island that easily accommodates 20 students, just right for the many Chabad Tulane programs that feature kosher food.

“Food is a uniting experience, a good setting to jump off into anything else, like learning, discussion, and it also makes everyone happy,” she said.

Though the kitchen churns out massive quantities of food, its cabinetry and fixtures are homey, not cold stainless steel. “Hanging around a Jewish family atmosphere is what makes Chabad memorable and meaningful,” said Rivkin. It’s part of the reason why the Rivkins chose to build their family’s home on the ground floor of the center, accessible through a separate entrance, instead of living in a separate space like they did pre-Katrina. Having the childrens’ bedrooms nearby means fewer babysitting hassles and no more dragging sleepy kids home from late night Shabbat dinners.

On the top floor of the new center, an inviting library offers a Jewish reading room, space where students can work and study, and an office for the student board. Ping Pong and pool tables widen the procrastination options. A second kitchen will be open for use by students who wish to cook their own kosher meals.

As the new semester begins, Chabad of Tulane is hosting several parties to welcome the students to the new center. When they enter the building, even if they just look around it’ll be a Jewish experience. The Rivkins have commissioned pieces of digital art, oversized posters, on different Jewish topics. Alongside the sink, a thought piece of the role of water in Jewish life will be posted. Candle and tefillin installations are coming next.

Garrett Jacobs, who’s on his way to a master’s in architecture, is impressed by the space. “There’s a lot of light. The space is not daunting. The colors and the effect they have is very homey,” he said.

”Now we have a place to relax, a place to go to study. It’s something we never had as a Jewish community on campus before.”