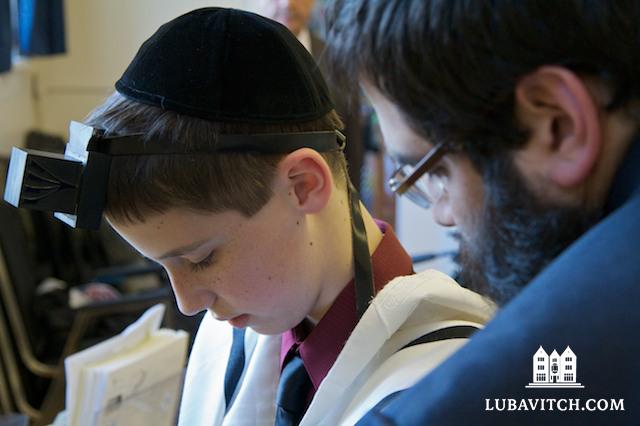 All News
By Mindy Rubenstein , Vancouver Island, BC

When synagogue newcomer Don Morris accepted his rabbis offer to wrap Tefillin for the first time, he hadn’t imagined it would be a life-altering experience.

“This was a desire to connect to my own soul and my own family roots,” said Morris. After exploring different spiritual and religious paths, Morris felt he had reached a point where “it mattered a lot to me where I came from, the lives and sacrifices of generations who carry my name and my DNA.”

It’s somewhat ironic—or divinely inspired–that of all places, Morris, now in his 60s, reconnected on Vancouver Island. Far removed from any significant metropolitan Jewish communities, the island is beginning to see Jewish life blossom as Chabad reaches out.

Though he grew up in New York, “God and Torah were not a part of our lives,” Morris said of his childhood.

After his tefillin experience Morris located father’s pair of old tefillin and brought it back to the rabbi in excited anticipation. Upon inspection of the worn Hebrew letters on the outside of the bag, Rabbi Meir Kaplan discovered that the tefillin had in fact belonged to Don’s grandfather, Isaac Morris, and was dated April 1913. One hundred years later, Morris had filled in the religious gap and reconnected to his past.

Rabbi Meir and Chani Kaplan arrived in Victoria ten years ago. The only real Jewish presence on the island’s capital, the Kaplans work with a sense of urgency to engage Jews intellectually, spiritually and socially, putting “Judaism at the center of life for Jews on the Island.”

Like other Shluchim in remote places, the Kaplans have grown accustomed to the challenges of daily life—procuring kosher food products from afar and tapping into online resources in order to provide their seven children with a Jewish education. It’s a sacrifice, but one that they say pays high dividendes in a community where hundreds turn to them for guidance and inspiration.

“Rabbi Kaplan is an exceptional rabbi in that he truly is caring and has a deep love for the tradition and Jewish history. He’s very intelligent and sophisticated in intellectual and cultural ways. So he knows how to connect with all kinds of people who come to Chabad,” said Morris, a semi-retired psychoanalyst.

“What’s so wonderful about Chabad is they are not just a synagogue or temple. It’s not a Jewish community center. It’s simply a very family and yiddishkeit-oriented experience. A place for all Jews.”

THEY CAME TO GET AWAY

With its thickly misted mornings and surreal landscapes, Vancouver Island is an appealing destination for those seeking an escape. The first Jews arrived on this Island, twice the size of Hawaii, during the 1863 gold rush. Some 5,000 Jews live in Victoria and surrounding areas, but before the Kaplans arrived few had ever met an Orthodox rabbi.

“There was not a strong Jewish awareness previously,” Rabbi Kaplan said. “We reached out and now have regular programs, a successful Hebrew school, preschool, women’s programs, summer camp and adult educational classes. Involvement in Jewish life has increased dramatically over last 10 years.”

Having outgrown the current rented space Chabad recently launched a building campaign with a goal of raising $2.5 million to purchase or build new facilities and to accommodate the growth.

Lindy Shortt and her husband Stan have lived in Victoria for 30 years.

“The more we came to know about the Kaplans, the more we admire them and the work they do,” said Lindy, a registered nurse and interior decorator originally from South Africa. She first met Chani when helping to decorate the preschool.

“The Shluchim are not only selfless, but tireless. We watched them working with families and children and singles, people new and not so new. Everybody received the same respectful loving outreach. It’s on a level I have never seen. They have been patient and thorough, non-judgmental and loving and kind in every single way.”

The Shortts are on the committee to help with Chabad’s new building campaign. “We’re really pumped to get this going.”

Rabbi Kaplan, the son of Chabad emissaries from Safed, acknowledges that “everyone is at their own level.  We are here to guide them, whether we are reintroducing Judaism back into their lives, or introducing it for the first time.”

That is done with simple, heartfelt acts, such as inviting guests for Shabbat meals, giving classes, and asking people like Morris to put on tefillin – a mitzvah that has been performed for generations.

“Rabbi Kaplan is not just a teacher of Torah. I believe he lives it and loves it. He’s truly welcoming of all Jews,” Morris said.  “He wants to help reunite Jews to their souls and their heritage.”