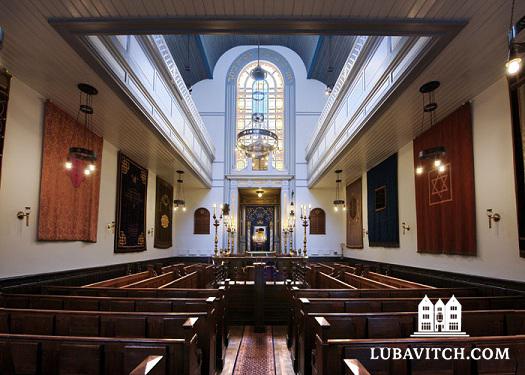 All News
By Mordechai Lightstone , Amsterdam, The Netherlands

While the debate about bill banning kosher slaughter continues in the Dutch parliament, the Jewish community of Amsterdam enjoyed a historic experience when the old Gerard Dou street Synagogue, located in downtown Amsterdam, hosted Friday night services for the first time since the Holocaust.

Hidden between two row-houses on the narrow street, the synagogue was overlooked by the Nazis, and so it remained intact. After the War it was the first synagogue in Holland to reopen. But as the Jewish population shifted from the synagogue’s home in the De Pijp neighborhood to residential areas in the south of the Dutch capital, it fell into disuse. For the past fifty year it has remained closed during the week, opening only for Shabbat morning and High Holiday services.

The location of the Gerard Dou Street Synagogue in the city’s center makes it ideal for the work of Chabad emissaries, Rabbi Akiva and Taiby Camissar. Arriving last fall to serve the Dutch capital’s community of 9,000 Israeli expats and the estimated 50,000 Jewish tourists that visit the Dutch capital each year, the Camissars have seen a steady uptick in their work.

Currently the young couple host Shabbat meals for some 30 guests in their living room. But with as many as 150 weekly guests expected during summer tourist season and Holiday services drawing even larger crowds—some 300 guests attended their Passover seders this year—the Camissars have been forced to look for a larger space.

When Akiva approached the representatives of the Gerard Dou Synagogue about renting its event hall, the subject of expanding prayers services was broached. Currently the Camissars only offer Shabbat evening services, but in the coming months they plan on running weekday services as well.

“Outside of Shabbat services held in the historic Spanish-Portuguese synagogue, there is little in the way of kosher and Jewish observance in the city’s center,” Camissar says. “We hope to fill that void.”

Visitors to Amsterdam are welcome to register for Shabbat meals at www.chabadamsterdamcenter.com.