Five hundred years after the expulsion, a Jewish experience flowers in Catalonia 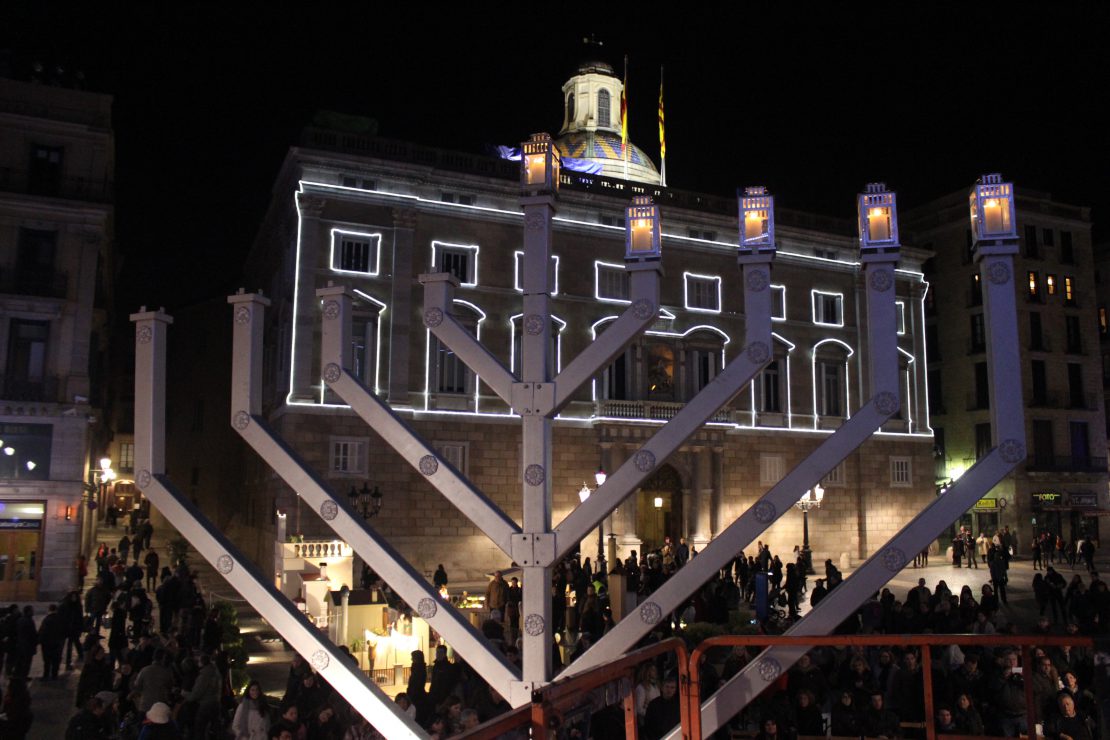 On a warm August afternoon during peak tourist season, a van plowed into Las Ramblas a pedestrian, tree-lined mall in central Barcelona killing 14 people and injuring 100. In October, the Mediterranean city was once again making headlines, this time as tensions exploded between Catalonian separatists declaring independence and crackdowns by the Spanish government.

Nechama Libersohn would rather Barcelona not be in the limelight. The 41-year old French native, a nurturing force in the Jewish community here since 1999 is grateful for the rare season that passes uneventfully. “There is always some drama,” notes the mother of seven. The exigencies land in her lap. She recalls the visitor from the U.S. who had a heart attack while vacationing in Barcelona, the pregnant woman from Israel who was delivered by emergency c-section at 26 weeks, the French teenager who developed a life-threatening infection while touring.

More than 350,000 Israelis visit every year. When terror struck this summer, Nechama and her husband, Rabbi Dovid, were deluged with frantic calls from around the world. “It was the height of the tourist season, and everyone who had family visiting Barcelona called us frantically. They wanted us to locate their relatives. They didn’t know who else to call.” As the go-to address for anything Jewish in town, the Libersohns make a point of never leaving town over the Shabbat weekend. It would be like leaving her family to fend for itself, says Nechama.

Carlos Schor concurs. A local engineer and one of Barcelona’s 5,000 Jews, he has observed the Libersohn’s steady, painstaking work of rebuilding Jewish communal life in this Catalonian capital. “This is where the city’s Jewish activity is. It’s where the future of Jewish Barcelona is.” Still in the backdrop are Spain’s history of expulsion and forced conversions, and with a gap of hundreds of years that saw no Jewish life here, Carlos thrills to the Jewish revival that Chabad has brought to the city.

In 2015, 500 years after the Inquisition, the Spanish government approved a law offering descendants of Jews who were forced to flee the country Spanish citizenship. Described by the government as a corrective to the “historic mistake” it made when it forced Jews to convert to Catholicism, Spain is unfortunately not without anti-Semitism today. Indeed, a recent ADL survey named it the second-most anti-Semitic country in Europe, with about one in three Spaniards subscribing to anti-Semitic views.

One of the first Ashkenazic Jews to be born in Barcelona since the expulsion, Carlos grew up under Franco’s fascist dictatorship, where Jews had no privileges in the Catholic country. “We were not allowed to congregate. We had to celebrate holidays in private.” It wasn’t until the 1950s, when the U.S. formed agreements with Spain during the Cold War, that the Jewish community finally built their own center. Still, explains the 67-year-old who recalls his high school classmates “looking for horns on my head,” Jewish life only hit its stride in the last decade. “Today we have people who go out in the street with a kippa. That’s only because of the example that the Libesohns set. You never saw that in the past.”

Their first public menorah lighting in the city center was a game-changer. Forty Jewish locals participated. This bold display of Jewish pride was a shot in the arm for Barcelona’s Jews, more of whom would attend with every subsequent year. Soon the city’s mayor and ministers were participating. Last Chanukah, more than 300 joined the menorah lightings at the Palau de la Generalitat and Turo Park. Other Jewish holidays similarly draw sizable numbers, with as many as 600 at Chabad’s Passover seders and more than 1,000 during the high holy days.

In a country where religion is often met with skepticism, and where being a tiny minority makes Jewish life “not easy,”  this is remarkable, observes Axel Santilo a local businessman who has been involved with Chabad for many years. “We are up against a lot of prejudices.” Anti-Semitism. And ignorance. There are a lot of people who just don’t know. “People are always asking me, ‘What is a Jew? What is kosher?”

The Libersohns have patience. They address one question at a time; they welcome one person at a time; they build friendships that endure; they awaken Jews to a nascent Jewish experience. Word travels. Travelers come. Slowly but surely the Libersohns would see their numbers grow, their space outgrown. “Every year, little by little, we got to know more people,” says Nechama. Shabbat dinners swelled with guests and soon they were renting hotel space for events that drew more guests than could fit in their home.

By 2014, a comfortable Chabad Center was more than necessary. Funding would come in little bits from lots of people. Crowdfunding and small contributions from locals and tourists added up. “We don’t have a wealthy community,” observes Rabbi Libersohn, “but we have the support of hundreds of tourists who bought ‘bricks’ of their own for the new center.” More than 600 to be precise, generating more than a million dollars toward renovations.

Last year, Chabad moved into their new, two-story space with a shul, kindergarten, classrooms, a social hall with space for 300, a kitchen, and a mikvah that is in the works. Since the new center opened, Chabad has seen a full house of about 100 guests every Friday night. Today, maintains Schor, “Chabad is the strongest Jewish organization in Barcelona.”  And it happened, notes Santilo, organically, the result of grassroots support for the work of Chabad. “We did it all on our own. No philanthropist, no sponsor, no foundations, no major gifts. Just us. We were all part of this.”

Sometimes, after forging close bonds with local Jews, the Libersohns find themselves saying good bye. “When people here begin to take their Jewish involvement seriously, many of them move away to larger Jewish communities.” It’s a loss in numbers for the small community, but the Libersohns give them a loving send-off. “To us, if they leave because they want to deepen their Jewish involvement, that’s good news.”