No More Tuna and Crackers ala Suitcase: Kosher is on the House 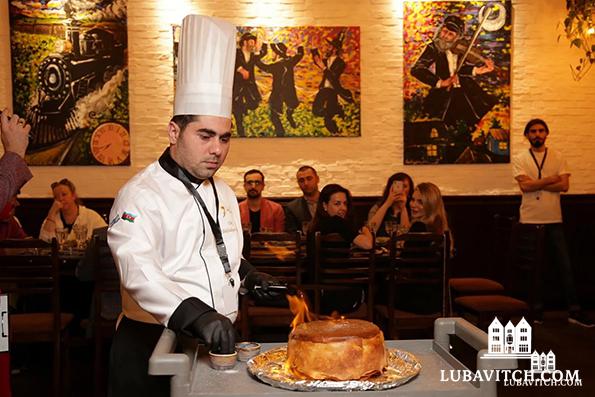 When Chaya Mushka Segal arrived in Sliema, Malta, six years ago, she found herself manning not only her new Chabad center, but also its nascent restaurant. Together with her husband, Rabbi Chaim, Segal prepped and cooked and served hundreds of tourists and visitors at their centrally-located cafe. Now, L’Chaim, perched on the island nation’s glistening bay, boasts a trained chef in its highly-rated kitchen. These days, Segal focuses on teen and youth activities while simultaneously managing the books and placing orders for kosher meat and groceries from across Europe. Thousands of customers dine at L’chaim each year, enjoying not only its culinary bites, but also its spiritual nuggets.

Chabad emissaries around the world are increasingly opening restaurants within, or near to, their centers. Mostly located in tourist spots, they offer a kosher meal and a welcoming environment for Jews who may otherwise balk at entering a synagogue. It’s also a great place to meet other travelers of the tribe.

Several years ago, an American embassy employee working in Malta was heading to a casino on the bay. He paused when he saw L’chaim’s awning advertising the Chabad House’s kosher food. His grandmother, he recalled, had studied with the Lubavitcher Rebbe at the Sorbonne in France. Decades later, when he was suffering an illness as a child, she brought him to meet the Rebbe for a blessing. The Rebbe remembered his former classmate and the two chatted. The young boy, not at all religious, forgot the encounter until he saw Chabad’s presence on his adopted island.

Ditching plans for an afternoon of gambling, he entered the restaurant and met the Segals. Soon after, he purchased his very first pair of tefillin and made some changes in his personal life. Stationed elsewhere today, the Segals connected him with his local Chabad representatives.

Not all dinner encounters are so dramatic, of course. But there is something to be said for the casual setting that engenders an intimacy and dialogue on vacation. And the kosher food, often the locale’s specialty, is a rare find on holiday.

Off another coast, across Europe, Segal’s cousin Rabbi Shneor Segal recently helped open 7/40, Baku, Azerbaijan’s first kosher restaurant. Approached by a local businessman, Segal contributes the kosher know-how to the partnership and today, the seventy-seat Azeri restaurant is booming. Since its post-Passover launch, 7/40 has hosted two brit milah ceremonies that would otherwise have taken place in non-kosher establishments.

The country, which is ninety-six percent Muslim, is very hospitable to its small, ancient Jewish populace. Segal allows his young children to roam freely (kippah and tzitzit proudly displayed), a rarity in today’s Europe. The meat is ritually slaughtered locally, also not a given for Azerbaijan’s legally-challenged neighbor countries. “There is no anti-Semitism here,” Segal says, “and we have a very good relationship with the people and government.” There are ten direct flights to Israel weekly and tourism in general is on the rise. During a recent soccer tournament here, Jewish visitors poured in from England, Europe, and the United States creating a waiting list for tables.

Before the restaurant opened, Jewish tourists ordered catered food from Segal’s catering kitchen located in his school. “The restaurant is much more comfortable and people can order what they want and when they want,” he says. Segal often conducts personal meetings in the beautifully-appointed Kavkazi dining room to encourage people to try the kosher cuisine. “One of our missions here is to teach people, locals and tourists, about kosher. And there is no better way than this.”