No Cop-Out: Minnesota Police Stand in Solidarity with Israel 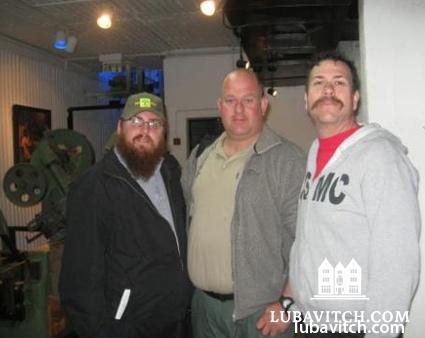 (lubavitch.com) A rabbi, a priest, and 15 police officers step off an airplane at Ben Gurion Airport.

This sounds like the first line of a corny joke. But for Rabbi Mayer Rubinfeld, this yarn bears all the trappings of a great story.

As an extension of his role as Chabad representative to St. Paul, Rubinfeld is a chaplain for the city’s police department. Aside from serving the police officers and ministering to grieving families, the gun-toting rabbi is also a face for Jews in a department that sees few of them. So when he was approached by several police officers to lead a law enforcement trip to Israel, he readily agreed.

This spring, Rubinfeld brought 15 of Minnesota’s finest, together their spouses, to the Holy Land. He was accompanied by Matthew Chikles, a fellow chaplain, who takes his own church to Israel regularly. “They loved all the places in Israel,” says Rubinfeld. “One cried at the Kotel (Western Wall). The officers were touched when we visited the settlements and saw how the Israelis really live. They realized that whatever they see on the news is not necessarily what’s going on.”

Though Chikles has been to Israel 11 times in as many years, he says this trip was unique because a “Christian pastor and an Orthodox Rabbi are friends and were able to show things from a Biblical/Torah perspective. We can learn from each other and share that with others.”

While in Israel, the officers visited with their Israeli counterparts and learned about the unique threats their colleagues face daily. “We were met on the plane by Deputy Inspector, Adar Yahalom. He took us to the border with Gaza and showed us several intelligence operations, as one of our officers specializes in intelligence.” The group also visited Israel’s police headquarters and academy where they were introduced to several of the force’s exceptional programs.

Mark Wiegel, a narcotics officer for 25 years who took the trip with his wife “because we love to travel and wanted to get the Biblical and historical perspective on the country,” he says he learned a lot about his own job during their 10-day stay. Because Wiegel works with a yellow Labrador trained to smell narcotics, Yahalom arranged for the officers to meet with the Israeli canine department.

“Their program is very good and it was really interesting to see how they operate. They are the experts. We can learn a lot from them, particularly how they handle security concerns and respond to critical events.”

The officers had a first-hand glimpse of life in a war-zone when they visited the besieged city of Sderot. There they toured the city’s police department and met with the head of the Israeli bomb squad and the chief negotiator. Their trip became emotional during a visit to Alon Moreh where they spoke with Chabad shliach, Rabbi Yehuda Rubin, whose son was injured in the recent war with Gaza. Rubin described his small settlement in the Shomron and encouraged the officers to open their minds about life in Israel.

“I escort delegations from all over the world, especially from the States, so I know how visitors are impacted after visiting Gaza, Jerusalem, and the Tel Aviv terror sites,” says Yahalom. “I love that they become ambassadors of Israel.”

“From a spiritual perspective it is very important to understand why you believe what you believe,” explains Chikles. “The evidence is overwhelming that there is a God and that this is His land. Cops are cops and to see the evidence is so cool.”

Rubinfeld believes the experience was pivotal for his officers. “Their entire view of Judaism and Israel changed since the trip. It totally altered how they look at the Jewish community, globally and locally. Before this, they did not understand what Shabbos is. After spending the weekend at a religious kibbutz, they are familiar with how observant people conduct themselves. Now, if they are dealing with a Jewish person here in St. Paul, they will be more understanding and accommodating.”

An October 2010 trip is planned for Jewish and non-Jewish police officers from around the country.