New Synagogue to Rise in Derbent 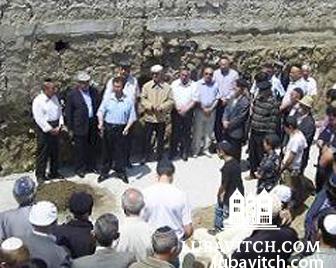 (lubavitch.com) Derbent’s Jewish community recently celebrated a ground-breaking ceremony for the construction a new synagogue. Home to one of Russia’s oldest Jewish communities, the city counts some 8000 Jews today, under the leadership of its Chief Rabbi Ovadya Isaakov, a Chabad-Lubavitch representative.

The synagogue is to be constructed on the same foundation of the city’s 100 year-old synagogue. The oldest town in Dagestan, and possibly in all of Russia, archeologists have uncovered ruins that date Derbent’s development back 5000 years. Situated strategically between the Caspian Sea and the Caucasus mountains, the town serves as Dagestan’s central district.

Leading the ground breaking together with Rabbi Isaakov was Robert Ilisahev, President of Derbent’s Jewish community, and Petr Malinsky, secretary of the community board, as well as other lay leaders.

The synagogue is expected to be completed in August.