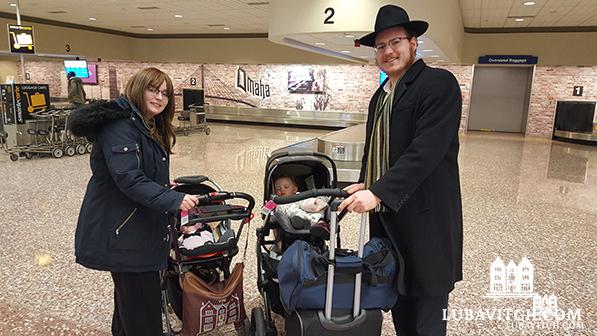 Rabbi Daniel and Chaya Blotner arrived in Omaha, Nebraska last Thursday morning. The couple join veteran Chabad representatives Rabbi Mendel and Shani Katzman in their work here in the Gateway to the West.

When the Katzmans came to town in 1986, the city’s traditional community was experiencing a steady decline. “You’re too late,” people told them. “On the contrary,” responded the Katzmans, “we’re here to build this place back up.” They’ve been doing that ever since. Though small, today the Omaha community is ever more committed.

Katzman put that commitment to the test with a proposal to his board members last year: the chance to sponsor a couple who would jumpstart new programming and expand Chabad’s reach. Excited at the opportunity, several individuals are paying for the Blotner’s trial year. As these lay leaders help direct Chabad’s trajectory, their pride and involvement grow exponentially. Katzman is a firm believer  in having his stakeholders make decisions, and then see them through rather than rubber-stamping proposals. The programs developed in this pilot year will be vetted for success and reach, and the most popular will reap renewed funding in 2021.

In 2017, the Omaha Jewish Federation conducted a sweeping study of the city’s Jewish population. Some 8,000 Jews were tabulated, most of whom affiliate at some level, even if only with a JCC membership. The number of natives is not growing, but in recent years, the city has welcomed a significant influx of young professionals in the tech and medical fields. Many slide right under the Jewish radar. Reaching out to them is one of the Blotner’s primary objectives.

The couple has already met students at the city’s three main university campuses where there is no Hillel or other Jewish organization. The Blotners will also travel to neighboring Lincoln and Sioux City, Iowa to meet those city’s Jews. Though here only a week, the Blotners are already planning Purim and Pesach activities. “There’s an element of connection already,” says Blotner. “It may be a small place, but there is a lot of potential here.”