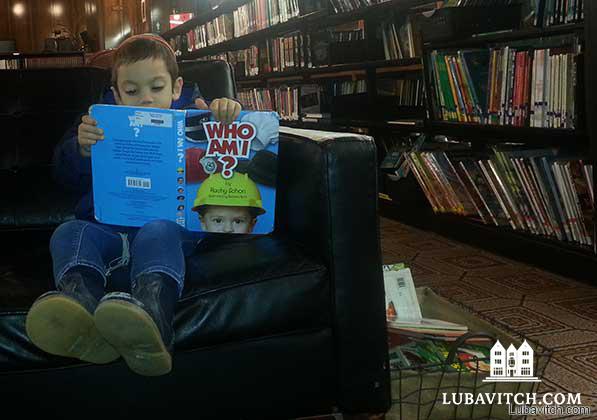 A young child reads a book at the Levi Yitzchok Library. Below is a class at the library.

First opened in the early 1970’s, the Levi Yitzchok Library fell into disrepair after its longtime director passed away almost two decades ago. Today, the Brooklyn library is humming once again with activity as readers of all ages find good reason to visit.

“It was upsetting to see the library not being used, neglected and in disarray. The upkeep of a library needs dedication and for many years there were dedicated librarians devoted to its upkeep,” says Rabbi Shlomo Friedman, administrator of Lubavitch Youth Organization. “But it was a daunting task and needed dedicated directors.”

The library’s future began to turn when Rivky Katz, together with her husband Rabbi Yoni Katz, began utilizing space in the library for group discussions. “When we were there, we began asking ourselves: ‘Do people come to the library? Do people take out books? Why isn’t this place alive?’” With that, the couple decided spruce up the library and bring it back to life.

Named for the scholar and Kabbalist, Rabbi Levi Yitzchok Schneerson, the library was inspired by his son, Lubavitcher Rebbe, Rabbi Menachem Mendel Schneerson, who urged the opening of Jewish libraries. The library was opened under the auspices of the LYO and its late director, Rabbi Dovid Raskin, with the idea that it would as well be a place where people could engage in meaningful conversations about Judaism.

Shortly after its opening, the Rebbe donated his personal set of the Talmud to be used at the library. For many years the library served as a vibrant hub for young children, scholars and visitors to the community. After a period of decline, the library now offers readers and borrowers an updated catalog with thousands of new books. A reference library filled with scholarly tomes is available for students and scholars. As well, the space has been reconfigured, “making it more open, more available for classes and more people,” Katz says.

At a time when most people do their reading and research online, Rivky sees this as an antidote: “The Rebbe wanted to create a place where people interact with one another, not just a warehouse or a website that holds books.

“This is a place to borrow a book and then talk about it with others.”

Related Articles
View All
CHABAD OF KOREA TO OPEN LIBRARY AT THE NEW JCC
Chabad of Korea is planning to open the country's first Jewish library. Rabbi Osher Litzman, who opened the country's first Chabad House in Seoul in…
A Jewish Youth Library Grows . . . And Grows
OTTAWA, CANADA–Three years ago Marjorie Feldman was invited by Devora Caytak to speak at the Jewish Women’s Institute, a project of the Jewish Youth Library…
Get Inspiration to your inbox!
Newsletter
Join our weekly newsletter for inspiration and updates
Donate
Find Your Local Chabad Center
Chabad
About Chabad-Lubavitch
About Chabad Lubavitch
The Rebbe
Headquarters
Magazine
Magazine
News
News & Updates
In The Media
Impact
Social and Humanitarian
Social and Humanitarian
Education
Education
Community
Community