New Focus On Jewish Teens To Keep Them From Slipping Away 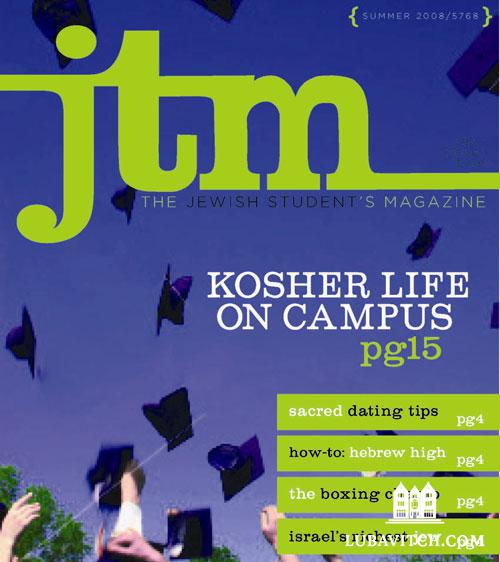 The cover of the premier issue of JTM, the Jewish Teen Magazine, to be launched this summer. (photo:lubavitch.com)

(lubavitch.com) Can religion be cool enough for teens? Chabad’s new teen initiative is working to make the answer “yes” – in a very big way.

The multi billion-dollar industry that refashioned the teen years into a lifestyle, influences what high school students wear, listen to, how they act and where they hangout. Their success has knocked the priority given to religion, tradition and values down peg after peg.

Chabad Teen Network, C-TeeN to insiders, is a new movement in the works that seeks to energize Jewish life and teachings for teens. The goal is nothing short of a comprehensive, worldwide movement of Jewish teens.

“There is no end to the programs that work to capture the mind of a teenager, but they do not necessarily focus on a Jewish perspective,” said Rabbi Mendel Kotlarsky, program director, which is developing C-TeeN with funding through Tabacinic Family Foundation.  “Chabad has a great track record working with these types of challenges.”

Directors of Chabad’s standout teen programs, Jewish education specialists, web mavens, and graphic designers have been structuring the program for roll out this coming year.

C-TeeN will take teen programs run by individual Chabad centers to a new level, said Rabbi Berel Frankel, who is involved with the C-TeeN planning committee.

C-Teen members are in for programs that are sophisticated and Jewish-content rich, without being overbearing. Jewish study classes that will speak to what teens want to know (and what Hebrew school never taught them); a magazine for students, both teen and college-age, will spotlight C-TeeN activities and achievements around the country.

C-TeeNers will have a chance to get to know other C-TeeN members via the group’s exclusively-for-teens website, regional and national Shabbat retreats, and a strong presence on social networking sites.

“For a Jewish teenager living where there are few other Jews their age around, getting to know other Jewish teens helps them feel like an insider instead of an outsider, and that’s crucial if we want them to stay interested in Judaism,” said Rabbi Frankel.

A large part of C-TeeN’s mission is to help Jewish teens find their place in Jewish life as they make the transition to college. There’s a Chabad center on nearly every major U.S. campus, and C-TeeN members will be introduced to their campus representative, so they can remain involved in Judaism without missing a beat.

Teens going missing from Jewish life during the gap years – after the bar and bat mitzvah and before marriage – has been an issue the Jewish community has grappled with for years.

According to a study conducted by the Cohen Center for Modern Jewish Studies, 50% of Jewish children are involved in some sort of Jewish educational program before they reach age 13. By the time Jewish teens hit 18, only 25% report belonging to any organized Jewish activity.

With Chabad representatives in place in cities across the U.S.–and many of them already reaching out to teenagers, the program is expected to gain momentum rather quickly.

“Chabad has an advantage because they already have people in place in cities across the country who are motivated to make this happen,”  says Rabbi Frankel.