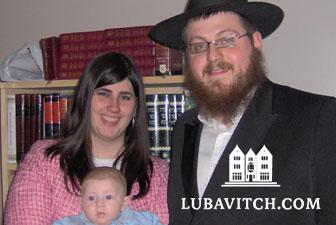 The toughest challenge for the new Chabad representatives to Santa Fe, in Santa Fe province, Argentina, is to gently dispel mistaken notions about Jewish identity pervasive to this community of 1500 Jews.

“Assimilation here is very high, and we have a lot of people of mixed marriages harboring misconceptions about Jewish identity,” Rabbi Yair Vassershten told Lubavitch.com.

Since coming here from Buenos Aires by the invitation of Rabbi Shlomo Tawil, Chabad’s representative to Rosario, Rabbi Vassershten and his wife Debby have been received with warmth and even gratitude by people on the street and in their places of business, where Vassershten goes to seek them out.

The people here are remarkably “absorbent,” he says, describing their openness to yiddishkeit, despite so much misinformation.

Rabbi Vassershten has been going door to door, introducing himself. “Many are telling me that they feel so good to know that someone finally cares about their spiritual life.” One non-Jew approached the rabbi, and upon learning why he was there, said that he wished his priest would come knocking at his door too.

At least as far back as anyone seems to remember, this community has never had an Orthodox rabbi, which may explain why Judaism here is perceived and defined arbitrarily, as a matter of personal feelings.

With intermarriage rates hovering well over 60%, the young Chabad couple must straddle a delicate line, reaching out to people while at the same time, breaking painful halachik facts to them, such as that their children may not be Jewish.

It’s sensitive, it’s difficult and sometimes, it comes as a shock to people who insist that they feel Jewish. But in cases where matrilneal descent cannot be established, Vassershten does not mince words.

“We will do whatever we can to reach out to a Jew who may be in a mixed marriage,” explains Vassershten. “But we need to be very clear about how Judaism defines a Jew.”

If the truth hurts, as it surely must in many such instances, people nonetheless seem to appreciate that the Shluchim approach them with respectful honesty.

Estela Ribak, 57, whose business is on the same block as the Vassershten’s apartment that now doubles as a Chabad House, told Lubavitch.com that she feels “so thankful to Deborah. Every Friday afternoon I come to her house to light Shabbat candles. I don´t know if it is the smell of the Challahs coming out of the oven, or the light of the candles, but it became a very special moment for me.”

One individual, 59 years old, accepted Rabbi Vassershten’s offer to wrap tefillin. The last time he did it was 46 years ago, at his Bar Mitzvah, he told his new Chabad rabbi.

The new representatives will extend their outreach to small pockets of Jews in the surrounding towns of the Santa Fe province.

Related Articles
View All
Features
Anatomy of a Law
Most commandments in the Torah are so cryptic that a straightforward perusal will leave the reader without the knowledge necessary to understand or fulfill them
Features
I Will Learn It on a Train, I Will Learn It in the Rain
What was once the province of an elite few is now available for free online in every language
Features
Memories of the Heart
Elisha Wiesel speaks with Lubavitch International about his famous father and raising his children to love Yiddishkeit
Features
From Dealing Drugs To Writing Scrolls
It took years in and out of physiatric wards, and several close brushes with death at the hands of mafia-hitmen and street toughs before Jordan…
Get Inspiration to your inbox!
Newsletter
Join our weekly newsletter for inspiration and updates
Donate
Find Your Local Chabad Center
Subscribe
|
Log In
Chabad
About Chabad-Lubavitch
About Chabad Lubavitch
The Rebbe
Headquarters
Magazine
Magazine
News
News & Updates
In The Media
Impact
Social and Humanitarian
Social and Humanitarian
Education
Education
Community
Community