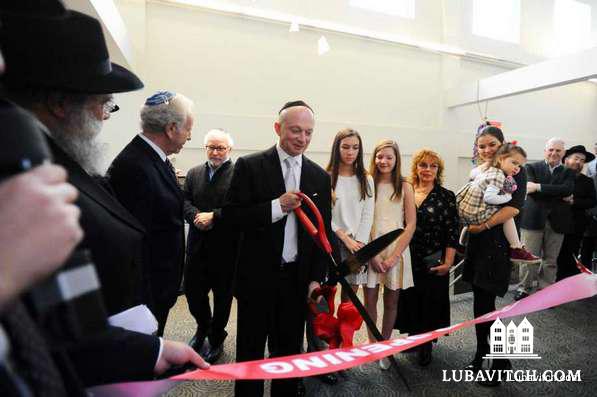 Situated on a prime two acres of land along one of Stamford’s busiest thoroughfares, the 20,000-square-foot center provides much-needed space for Chabad’s many activities, including a preschool of more than 100 children, after-school programs, continuing education courses for adults, and a Friendship Circle network that works with 300 teenage volunteers and caters to more than a hundred families with special-needs children.

“As the most prominent Jewish building in the Stamford Community, the center is a catalyst for others to initiate and increase their Jewish activity,” said Rabbi Yisrael Deren, who founded the Chabad branch in Stamford in 1974 with his wife, Vivi. “Quite a few people are now involved with Jewish life thanks to programs that are hosted in the building.”

Renovations on the light-filled space, which was designed to mimic the shape of an open book, were 12 years in the making. Igor Tulchinsky, who has contributed to various global Chabad initiatives over the years, was one of several donors who funded the last phase of renovations. Originally from Belarus, he now lives in Greenwich, where his weekly learning sessions with Rabbi Yossi Deren (Rabbi Yisrael’s son) have, he says, enriched his life and influenced his outlook. “It’s a personal belief that the world has a real purpose and doing good things helps attach you to that purpose,” Tulchinsky said.

US Senator Joe Lieberman took the podium to speak about his long relationship with Chabad of Stamford. Rabbi Deren then shared a letter he had received from the Lubavitcher Rebbe nearly 43 years ago to the date of the event in honor of the dedication of the first Chabad he and his wife had opened in Amherst, Massachusetts. Providentially, he noted, the letter focused on the miracle of Chanukah.

The new facility features a shul, multi-purpose room, auditorium, ten classrooms, a library, and office space. Architect Elena Kalman became close with Chabad after the Derens hired her to design the center. “Once we knew them personally, my husband and I felt comfortable attending classes and services,” she says. She and her husband, both from the Soviet Union, settled in Stamford where they began to explore their Jewish heritage.

“Chabad became very important to us, and we started to feel like a part of the family,” Elena shares. The Kalmans have since introduced their friends to Chabad as well, some of whom now come regularly. “We’re adding a bit more in terms of bringing Jewish learning and tradition to our families and children.”

“As an architect, it was very special for me to be able to work on a spiritual building,” Elena says. Her maternal grandfather was studying in Berditchev to become a Rabbi when his yeshiva was shut down. “It’s the closing of a circle,” she laughs, “my grandfather didn’t become a rabbi, but here I am building a synagogue!”

To learn more about Chabad of Stamford, visit their website at www.chabadstamford.org.