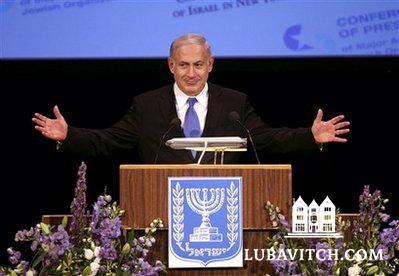 Israeli Prime Minister Benjamin Netanyahu speaks to a gathering of Jewish leaders at the 92nd Street Y in New York at the end of his visit to the 64th General Assembly debate of United Nations, Thursday, Sept. 24, 2009.
Photo Credit: (AP Photo/David Karp)

(lubavitch.com) In his official speech Thursday at the UN, Israel’s Prime Minister Binyamin Netanyahu minced no words decrying the “perversion of truth” and the “perversion of justice” emanating from the UN’s Goldstone report accusing Israel of war crimes during the Gaza strike.

“The UN is undermining its own legitimacy by siding with terrorists over their victims,” he charged.

Netanyahu began his speech deploring the fact that Holocaust denier, Iranian President Mahmoud Ahmadenijad has a platform at the UN for espousing his lies. The Israeli Prime Minister castigated delegates who gave the Iranian President an audience: “have you shame? have you no decency?”

Following his impassioned speech, Netanyahu spoke with members of the Israeli media. In answer to one journalist who asked whether he might not be lending credibility to Ahmadenijad by addressing his denial of the Holocaust, Netanyahu chose to focus on a prescient experience he had with the Lubavitcher Rebbe, Rabbi Menachem M. Schneerson, 25 years ago.

“Let me tell you something,” said Netanyahu. “In 1984, after I came to the UN as Israel’s Ambassador, I met the Rebbe of Lubavitch. He began speaking to me—he spoke to me for 40 minutes.

“He told me, ‘you are going to a place of deep darkness and lies, and if you will light one candle of truth, you will dispel the darkness.’

“That is what I tried to do here—to present the truth clearly and with confidence.”

Later in the evening, prior to leaving back to Israel, Netanyahu spoke to Jewish community leaders at the 92nd Street Y. Introduced by Alan Solow, Chairman of the Conference of Presidents of Major Jewish Organizations, and by Elie Wiesel, the Prime Minister, in his only address to the American Jewish community on this visit to the U.S., chose to speak at length about his encounter with the Rebbe when he arrived at the UN as Israel’s Ambassador.

“You will go into a house of lies,” he said the Rebbe told him in that memorable meeting on Simchat Torah at Lubavitch Headquarters back in 1984. “That’s how he called a particular institution . . .”

The Prime Minister said that the Rebbe gave him the “mission to light a candle for truth and for the Jewish people.”

Steven Salsberg, Vice Chairman of the Council on the Environment of New York City, spoke to Lubavitch.com following the speech. “You felt a wave of reaction in the audience,” he said.

In what appears to have been a profound moment in his life, the Prime Minister, speaking with emotion and admiration for the Rebbe, described in detail his impressions of that Simchat Torah in 770, when the Rebbe danced with the Torah, “bathed in light.”

The audience was riveted. “Netanyahu indicated that he then felt the power of truth,” says Salsberg.

Mr. Salsberg, founder of the companies that make up the Salsberg Group who is also well known for his activism for social responsibility in Jewish and American circles, told Lubavitch.com that in his view, “Many in the audience felt that this was the message of ohr la-Goyim [a light unto the nations]—the Prime Minister of the Jewish State bringing the Rebbe’s message of truth to the United Nations.”

Netanyahu ended his speech reiterating the Rebbe’s message, and appealing to his audience to do likewise, and “light a candle for truth and justice for the Jewish people,” this Yom Kippur.

As guests left the room, Salsberg heard many “talking about how in the past, they had heard different Israeli and American leaders meet the Rebbe and describe their experiences.