Moses, Mirrors and the Trauma of Birth 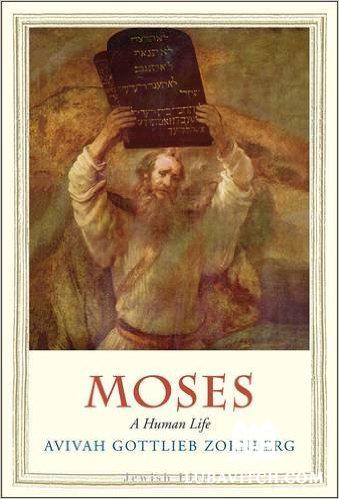 There is something starkly disconcerting—almost sacrilegious—about taking a “biographical approach” to the life of Moses, and one is reminded of the firestorm that surrounded the publication of Rabbi Adin Even-Israel Steinsaltz’s Biblical Images back in 1984. There is, on the one hand, the challenge to reconcile “the man Moshe” with “Moshe the man of G-d”—Moses as human, but not an ordinary human: a tzaddik, who resonates with G-d in a way that the rest of us cannot. A more immediate problem, is the paucity of “primary source material” to draw from—documentation that can give us some entry into the “inner life” of Moses. Zornberg’s provocative insight is to see Deuteronomy as a book giving “voice” to Moses’s inner world—in particular, his account of his impassioned entreaty to G-d that he be allowed to enter the land of Israel and the ultimate refusal of that request.

The final book of the Torah, Devarim, means “words” and it records the final words of Moses to the Jewish people. It is divine in origin, no less sacred than the rest of the Torah, and yet refracted through the speech of Moses—a reflection of the paradox of Moses himself. And it is apt that Zornberg chooses speech and communication itself as the dominant theme running through the life of Moses.

The book of Shemot begins with the immense suffering of the Egyptian exile, described as a time of groaning and shortness of breath when speech itself became impossible. As Zornberg notes, the essence of exile is galut hadibur—a time when communication with G-d becomes impossible. It is into these unspeakable conditions that Moses is born.

The Torah devotes considerable time to the trauma of Moses’ birth: his mother, desperate to keep him from being drowned by the Egyptians, places him in the river in a small pitch-lined box where an Egyptian princess hears his cries and rescues him. His own mother is hired as his wet-nurse but ultimately, he is returned to his Egyptian “mother.” It is unclear from the Torah how he sees himself as a child—at precisely what point he not only “identifies” with his brethren, but knows that he is one of them. In Freudian terms, as Zornberg notes, for all of us, the first trauma is birth. Trauma overwhelms, renders one mute, unable to communicate, and only resolves as one begins to be able to give words to what is unspeakable.

It is at this point that one first is caught up in the provocation of Zornberg’s work. To reduce the Torah’s moving account to a Freudian analysis feels like a trivializing of the sacred. But then Zornberg relates this to our own “trauma of birth”—G-dly souls cast into an “Egyptian” world that may glitter but is still ultimately foreign. Prior to birth, we are taught Torah in the womb—but at birth, we are struck on the philtrum, causing us to forget the Torah, but allowing us to speak. Of necessity, speech is a distortion, an approximation, an attempt to recapture a lost reality—but it is also the only way to “cross over” from one universe to the other. And now I am hooked into the magic of the metaphor: an opportunity to see the Freudian “story” as a way to describe the journey of the soul.

The theme of being unable— or unwilling—to “communicate” with a flawed universe is one that Zornberg sees as recurring through Moses’ life. At the burning bush, Moses responds to G-d’s call by saying “Here I am,” but also “Who am I (to speak to Pharoah).” Moses declares that he is not a “man of words” and that he is of “uncircumcised lips.” Moses is unable to accept the compromises, the distortions, the approximations that come with speech.

Language, like a mirror, is never the same as the thing itself, but allows us access to a sightline that would otherwise remain totally invisible.

This idea is echoed in the moving section where Moses implores G-d to “show him His glory.” G-d refuses, saying when “I wanted, you did not want (at the burning bush)—now that you want, I do not want.” Yet G-d does not deny him entirely. While Moses cannot see G-d’s face, he is embraced in G-d’s presence. In Chasidic terminology, while he is denied giluyim (G-d’s revelation), he has access to etzem (G-d’s essence).

It is a crisis of speech that ultimately leads to Moses’ inability to enter the land, when he hits the rock instead of speaking to it. But it is also speech that defines Moses’ crowning moment, when he shatters the tablets and intercedes on behalf of the Jewish people after the sin of the Golden Calf.

The student of Chasidism is familiar with the axiom that “the world thinks that the Torah speaks of the worldly and alludes to the spiritual. In fact, the Torah is meant to communicate spiritual worlds by alluding to the physical.” The only way to apprehend the G-dly and transcendent, is with the flawed and limited lens of our own worldly experience. It is our reality, then, that must be read as a metaphor—and this kind of non-literal reading is the only way to make sense and meaning of Midrash. It is when Zornberg is read in this light, with the literary and psychoanalytical sources a metaphorical “net’” for capturing truth, that her book is best able to shed light on Moses—a man whose life is so much “larger than life.”

Though much shorter than her series on the Chumash, this book is dense in content and emotionally evocative. Insofar as Moshe is the paradigmatic leader of the Jewish people, there is much here to inspire deeper thinking on our part about the nature of Jewish leadership. Zornberg draws heavily on literary and Midrashic references, with occasional references to the Chasidic insights of the Mei Hashilo’ach and the Sefat Emet. Yet the book truly comes to life when rather than reading the psychoanalytic, Midrashic, and Chasidic perspectives as alternate views, we read them recursively, as mirrors refracting mirrors, metaphors embedding metaphors, successive approximations of truth. At its essence, this book is about the large questions that are at the heart of the relationship of language and reality, communication and truth, the very nature of what it is to exist in our world—and in G-d’s world.

Zornberg cites a midrash of a king who is displeased with his wife and decides to divorce her. She asks the king for the name of the woman who is to replace her and then goes to her children and tells them that she won’t be there to mother them anymore. Concerned, they ask who is to care for them, and once she tells them, they are calmed. They do not realize that their role is to intercede with their father on behalf of their mother. Similarly, when Moses tells the Jewish people that Joshua will lead them into Israel, they complacently accept his words, rather than storming heaven on his behalf.

She pairs this with a midrash that tells Moses that the cost of him entering Israel is the safety and wellbeing of the Jewish people. Moses would have ushered in an era of perfection that could not abide error. To enter with him while they were still flawed in some way would be to risk their utter destruction. Unhesitatingly, Moses puts aside his deepest wish and he places them first.

In the spirit of her writing, let me add another layer to the metaphor. Personally, as I read this book, I found my thoughts drawn to the height of the Mashiach campaign in the late 80’s and early 90’s. What could we not see? What did we not ask for? And ultimately, what part of his deepest wish did the Rebbe put aside so that we could all one day take part in what he so desperately wanted?

According the Midrash, the final words of the Torah, recounting Moses’ death, are dictated to him by G-d and he records them in tears. As Zornberg notes, the end of Moses life, like the beginning, is marked by trauma: his life’s mission still unrealized, the world not yet fully redeemed. His biological children do not continue his legacy. The Mashiach has not come. The Jews will enter the land, but will ultimately be exiled. The final chapter has not yet been written. And yet, that lack of closure has made room for us to take part in the story, and, with our own imprecise words, to take “Moses” where he could not go on his own.

Related Articles
View All
Book Review: Early Years
“What was the Rebbe’s childhood like? Who were his contemporaries? What kind of schooling did he receive? Who were his mentors and teachers? What role…
Book Review: Who Are You Calling Selfish?
Something powerful happens when we recognize that raising children is something greater than the vehicle to our personal fulfillment and happiness: it is a sacred…
Get Inspiration to your inbox!
Newsletter
Join our weekly newsletter for inspiration and updates
Donate
Find Your Local Chabad Center
Subscribe
|
Log In
Chabad
About Chabad-Lubavitch
About Chabad Lubavitch
The Rebbe
Headquarters
Magazine
Magazine
News
News & Updates
In The Media
Impact
Social and Humanitarian
Social and Humanitarian
Education
Education
Community
Community