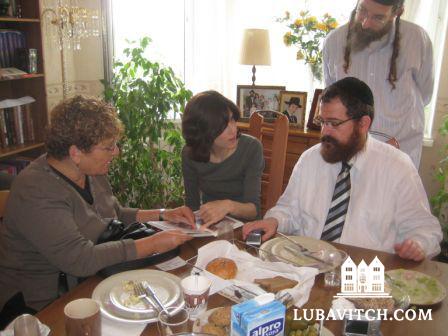 (lubavitch.com) Miriam Peretz, the Israeli woman whose two sons lost their lives while serving in the IDF, accompanied Israel’s President Shimon Peres on a visit to Russia this week, marking 65 years of WWII’s end and Russia’s defeat of Nazi Germany.

Her elder son was killed 12 years ago in Israel’s war with Lebanon. Five years ago, Mrs. Peretz sustained another blow after her husband died following a heart attack, which she attributes to the grief he suffered over his son’s death. Less than two months ago, another son was killed in action.

Monday morning, Mrs. Peretz and her son Elyasaf, visited the Marina Roscha Jewish CC in Moscow where Rabbi Yakov Fridman led them on a tour of the seven-storey facility, followed by a visit to the Fridman home.

Over breakfast, Miriam talked about how the news of her son’s death reached her a few days before Passover this year. When the IDF officers arrived at her door, she intuited what had happened, and asked them not to come into her house, hoping for a few more minutes to believe that her son is yet with her.

“I refuse to give up, to give in to sadness,” she says. Despite the incredible losses she sustained, she vowed, speaking through her tears, “I will continue to do my part to give strength to the Jewish people, to help raise my orphaned grandchildren.”

“The stamina and faith of this woman are enormous. She is a powerful inspiration. We were honored to have her visit with us.”