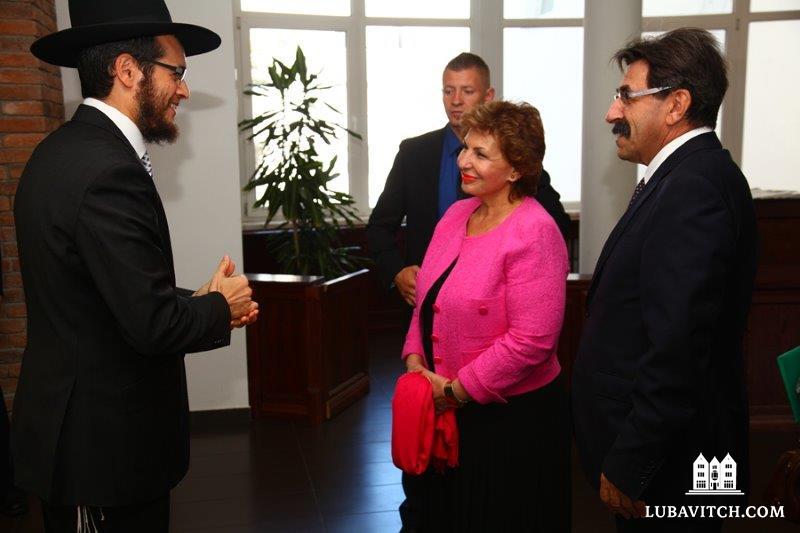 To mark the visa-waiver for Israelis traveling to Belarus and Belarusians traveling to Israel, Sofa Landver, Israel’s Minister of Immigrant Absorption, visited the Belarus capital of Minsk. Landver visited the Jewish community and met with the city’s Chief Rabbi Shneur Deitch, who described a city that enjoys peaceful relationship between its minority Jewish community and broader population.

Accompanied by Yosef Shagal, Israel’s ambassador to the country, the minister toured the new synagogue, and the Ohr Avner Chabad Day School, which, she observed, has been noted for its exceptional education.

The visa-waiver, which simplifies travel between Belarus and Israel, was celebrated by the Jewish community.

“This is a very important improvement in the travel between the two countries. Jews have family in Israel and many Israelis have family here, the waiver will make it easier for families to visit each other. It will also ease the travel for many who live in Israel and want to visit their grandparents’ homes and gravesites in Belarus,” says Deitch. “This will be good for everyone.”

Related Articles
View All
News Briefs
Remembering The Struggle for Russian Jewry
Ninety-three years ago today, Rabbi Joseph I. Schneersohn (1880-1950), sixth Lubavitcher Rebbe, and the leader of Russian Jewry at the time, was freed from Soviet-imposed…
News Briefs
STATEMENT BY CHABAD-LUBAVITCH WORLD HEADQUARTERS
Every day that Jews are barred from entering the synagogue by armed guards is an unforgivable violation of the Jewish people!
News Briefs
IL Governor Rauner Joins Chabad Emissaries in Prayer at Western Wall
Illinois Governor Bruce Rauner was joined by Rabbi Avraham Kagan of Lubavitch Chabad of Illinois on a visit to the Western Wall in Jerusalem Tuesday…
News Briefs
Kathmandu Emissary Organizes Rescue on Yom Kippur
It was the night of Yom Kippur, and Rabbi Chezky Lifshitz was not in shul.
Get Inspiration to your inbox!
Newsletter
Join our weekly newsletter for inspiration and updates
Donate
Find Your Local Chabad Center
Chabad
About Chabad-Lubavitch
About Chabad Lubavitch
The Rebbe
Headquarters
Magazine
Magazine
News
News & Updates
In The Media
Impact
Social and Humanitarian
Social and Humanitarian
Education
Education
Community
Community