Mezuzahs and More For Jewish Delegates and Athletes at Beijing Olympics 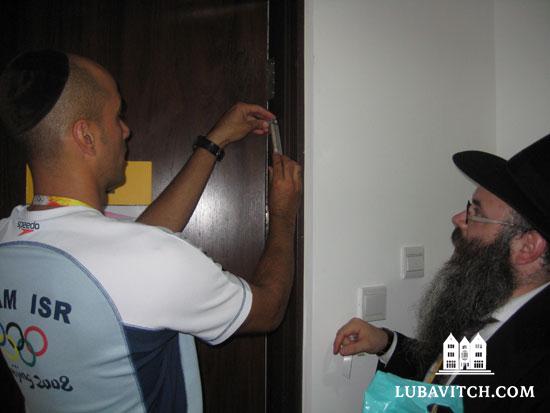 An Israeli Olympic athlete posts a mezuzah on his door with the help of Rabbi Shimon Freundlich. (photo:lubavitch.com)

Israel's President Shimon Peres, who is scheduled to be in China for the opening of the Olympics, will be joined by Rabbi Freundlich at a reading of the Book of Lamentations on Saturday night, the eve of Tisha b'Av, the ninth day of Av, which is observed as a day of mourning, commemorating the destructions of the First and Second Temples in Jerusalem.

Kosher consumers at the Olympics will have a full menu of kosher cuisine at Dini's Kosher Restaurant, situated near the American Embassy. The restaurant, which has large capacity seating, will also deliver vacuum packed meals to hotels in Beijing and beyond.