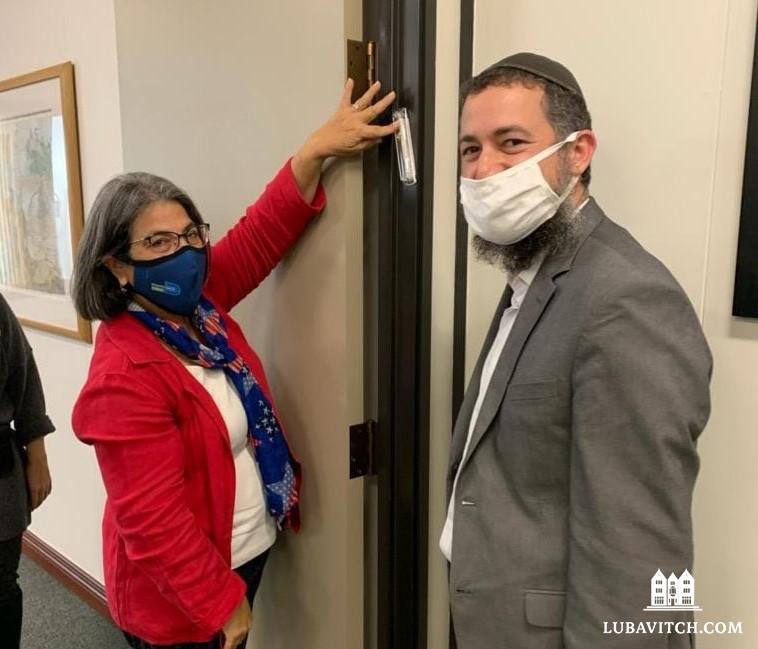 Among the first orders of business for newly elected Miami Mayor Daniella Levine Cava was affixing a mezuzah to her office doorpost. The ceremony, on Friday, November 20, was led by Rabbi Moishe Kievman of Chabad Chayil in Highland Lakes, Florida.

Levine Cava is Miami-Dade County’s first female mayor and also the first Jew to hold the office. She oversees a metropolitan government with more than 28,000 employees serving nearly 3 million residents, including some 125,000 Jews.

After affixing the mezuzah, the mayor tweeted, “As I took office this week, I’ve been reflecting on the Jewish principle of Tikkun Olam—to repair the world.” She thanked those who organized the event and Rabbi Kievman for sponsoring the mezuzah, “which will be a daily reminder of my guiding faith to serve our community.”

During the ceremony, Rabbi Kievman helped the mayor recite the blessing on the mezuzah and explained its importance: “The mezuzah, which guards our entranceways against outside harm, also protects what goes on inside. Placing a mezuzah at the mayor’s office places G-d at the doorway to our city.” The rabbi also noted that the mezuzah is affixed at an angle, a compromise between two differing Talmudic opinions about its correct placement. “In such a diverse community, the lesson of working together and compromise between differing opinions is something to constantly remember.”

The mayor’s tweet was well received by both Jewish and non-Jewish constituents. “The first mezuzah on the doors of the Miami-Dade County Mayor’s office! This is a truly historic moment for our community,” tweeted Benjamin Torrens. “I’m not Jewish,  but it’s such a joy to know that a woman of faith will be leading our county,” Elizabeth Guaico wrote. “May the G-d of Abraham Isaac and Jacob guide you every step of the way as you lead us during these crazy times.”