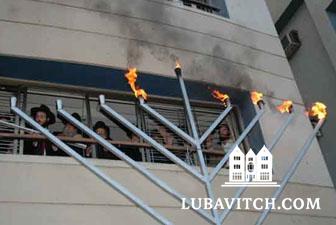 (lubavitch.com) Five flames danced in defiance Thursday, as the Chanukah menorah illuminated the Indian night sky. Standing 16 feet tall at the Gateway of India, Mumbai’s most famous monument, the menorah gave proof to Chabad’s promise: Gabi and Rivka’s light will not go out.

Thursday evening’s event attracted nearly 1000 onlookers. The 85-foot majestic arch is a mere 20 minute walk from the now ravaged Chabad house in the Colaba district, its directors and several guests slaughtered, less than a month ago. It is also the assumed entrance point from which the terrorists entered the country. Those gathered, from Israel, the United States, and points east, were here to commemorate the miracle of Chanukah and the marvel that was the Holtzbergs.

It was something his son-in-law relished doing. “He lit the menorah here each year,” recalls Rabbi Yosef Kantor, Chabad’s representative to Thailand. “Gabi particularly enjoyed lighting the menorah and spreading the light.”

In a more poignant setting earlier on Thursday, family, colleagues and friends of Gabi and Rivka who had come from Israel, New York, and other parts of the region, met at the Chabad House. Rabbi Nachman and Freida Holtzberg together with Rabbi Shimon and Yehudit Rosenberg, parents of the slain couple, and several of the couple’s siblings were also present to share memories and inspiration from the couple’s lives. With signs of the calamity everywhere, the intimate group went up to the rooftop for an impromptu Chasidic farbrengen.

In a gesture richly symbolic of Chabad’s determination not to let the evil of terror extinguish the light of Gabi and Rivkah, the hands of their parents and colleagues reached out from the windows of the Chabad House—its façade now a familiar image to millions who had seen it under siege—to kindle its lights, as 200 watched.

“Chabad is lighting the menorah to show that we are continuing strong,” asserts Rabbi Moshe Kotlarsky, vice-chairman of Merkos. “They lit it in life,” he says, “and we will persevere despite their deaths.”

Indian police and security personnel were present at the Mumbai lighting, in a city which Kantor admits, “is still not the safest place to be.” Many in the Asian Jewish community are very concerned about safety and Chabad outposts, Kantor states, “are upgrading their individual security procedures.” The Holtzbergs’ many colleagues, who serve communities across the continent, are committed to “go about life as usual, and even more than usual,” in the wake of the tragedy that hit so close to home.

Chabad menorahs, of course, are no stranger to the world’s most distant and distinct locales. Representatives from Chabad-Lubavitch headquarters lit three candles at the foot of the Statue of Liberty this year; a 24-foot menorah is lit in front of Moscow’s Kremlin annually; the Eiffel Tower casts its shadow on a giant menorah in France’s capital; a 13-ton menorah is proudly lit amongst the pigeons of Trafalgar Square in London.

In total, there are more than 10,000 menorahs lit in public places each year.