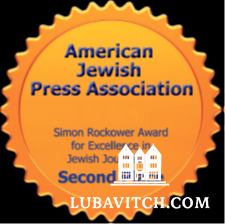 Lubavitch International won two awards in AJPA (American Jewish Press Association) Simon Rockower Awards Competition for Excellence in Jewish Journalism. The winning article, “From Heartbreak to Hope” (Lubavitch International, Winter 2016) is a story by Rena (Greenberg) Udkoff that shines a light on the tragic circumstances of homeless Jewish children in Russia and Ukraine. The article has won second place in two categories:

The award gala will be held on Tuesday, November 14 at the AJPA annual conference which takes place alongside the GA, the Jewish Federation’s General Assembly, this year in Los Angeles, CA, November 12-14, 2017.

“I am delighted that Lubavitch International has been twice recognized for this feature story by Rena Udkoff which illuminated the plight of a vulnerable demographic that has never been examined before,” said Baila Olidort, the editor-in-chief of the newspaper. Among other concerns, she says, the newspaper is dedicated to raising awareness through its coverage of Jewish people in crisis and the work that Chabad is doing for long-term impact.

Lubavitch International was founded in 1989 under the auspices of the Lubavitcher Rebbe, of blessed memory to represent the work of Chabad-Lubavitch globally. It published by Chabad-Lubavitch World Headquarters.