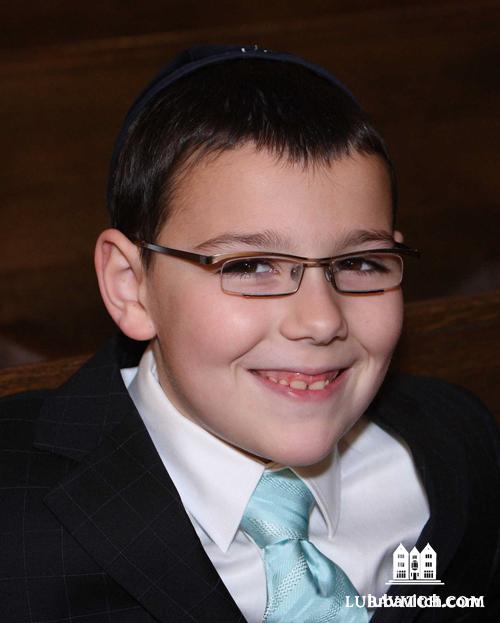 (lubavitch.com) Levi Yitzchak Wolowik was nine years old when he passed away suddenly on Shabbat morning, February 28th. The son of Rabbi Zalman and Chanie Wolowik, Chabad representatives to the Five Towns of Long Island, Levi was a dedicated emissary-in-training and a lover of sports and study.

Moments after concluding the traditional week of shiva, the Wolowiks announced plans to memorialize their son. In addition to a children’s Judaica library launched in his memory, the Wolowiks are dedicating a Torah to Levi.

They are not going at it alone.

Over 2,500 of Levi’s peers are participating in a Tanya-thon: memorizing lines of Tanya in exchange for cash from sponsors. Girls and boys from across the United States, Europe, Australia, South America, and South Africa are raising the $65,000 necessary to pay for the Torah scroll. In acknowledgement of Levi’s impact on his local community, children from all 12 Jewish schools in the Five Towns are also participating through the study of Ethics of our Fathers or Psalms.

Levi’s Torah is supported by MyShliach, an innovative “big brother” program for children whose parents are shluchim (Chabad emissaries), and Rabbi Shimmy Weinbaum in conjunction with Tzivos Hashem. Under the auspices of Chabad Lubavitch headquarters, MyShliach currently matches 340 boys and girls for a weekly study hour with a mentor. Levi was one of those boys.

“We always knew that he would have the easiest time studying for his bar-mitzvah,” says Wolowik. “He would come home and quote what he had learned in yeshiva. He loved to do it off the cuff. One of the reasons we chose this particular project is because Levi loved to learn.”

In Shanghai, China, three Greenberg children are busy memorizing two lines per night. The oldest, nine-year-old Mendel, was a camp friend of Levi’s. “It is especially meaningful for Mendel to have this opportunity to do something in his friend’s memory,” his mother Dinie says. “Children feel so lost in this kind of situation. Even though we live so far, they are close enough to participate in this mitzvah.”

Most of the participating children never knew Levi; that unfamiliarity only heightens the distinctiveness of this endeavor. United by their common goals and distance, many of those involved are also children of shluchim, simply taking care of their colleague. “We saw in Levi’s diary after his death that he was a proud shliach.(emissary). That was the future he wanted,” said his father.

The program includes raffles for great prizes, but you wouldn’t know it from asking some of the participants.

“Prizes? There are prizes? I didn’t know there were prizes,” responded a surprised Shmuel Dovid Raichik, when asked which he’d like to win. “I’m doing it because it feels good to help out, getting money for the Torah. It’s special because it’s in Levi’s memory.”

The 11-year old from Montgomery County, Maryland is memorizing Tanya’s chapter 32. He studies it with his father, Rabbi Sholom Raichik, on Shabbat afternoons and is then tested by the senior Raichik on the lines he has memorized. (They throw in a game of horse to keep things moving—loser has to study more.) Raichik has already solicited donations from his older brother, parents, and five friends.

“The fact is that when a tragedy touches any of us, it touches all of us,” Rabbi Raichik says. “We all feel for the Wolowik family, whether we knew them or not. The idea that we can bring kids together for this beautiful project is very meaningful. It shows the real connection between us.”

Raichik would know. Less than a month ago he dedicated a Torah scroll in his late brother’s memory. When Rabbi Yossi Raichik passed away last September, he left a thriving human rights organization, Chabad’s Children of Chernobyl, and a last wish, to dedicate a Torah at a Krakow synagogue named for his ancestor. His brother helped make that dream come true.

“Ultimately, the Torah is the source of Judaism and our lives as Jews,” Raichik says. “It is not just ink and parchment. It is an everlasting concept that has kept us going all these years. Dedicating a Torah is a beautiful way to eternalize a soul.”

Children are studying and raising funds until Shavuot. Sponsorships can be made online, at http://levistorah.com/

Related Articles
View All
Chabad-Lubavitch Mourns Sudden Death of Levi Wolowik
(lubavitch.com) Chabad-Lubavitch emissaries mourn the sudden death Saturday, of 9-year old Levi Yitzchok Wolowik, of Cedarhurst, NY. Levi was the son of Rabbi Zalman and…
Headquarters
Court Confirms Chabad’s Exclusive Rights To Flagship Synagogue At 770 Eastern Parkway
“Chabad-Lubavitch World Headquarters is gratified by the decision handed down last week by the Civil Court of the City of New York, confirming exclusive rights…
Headquarters
STATEMENT BY CHABAD-LUBAVITCH WORLD HEADQUARTERS
Every day that Jews are barred from entering the synagogue by armed guards is an unforgivable violation of the Jewish people!
Headquarters
Celebrating Radical Change With Chabad-Lubavitch
The banquet dinner, an elaborate, dramatic affair, is in itself no small nod to the challenge of radical transformation:
Headquarters
Hi Resolution: Annual Photo Captures Thousands of Faces
For some photographers, thousands of rabbis standing around the red ‘no standing’ sign outside Lubavitch World Headquarters are a dream; for others, a nightmare.
Get Inspiration to your inbox!
Newsletter
Join our weekly newsletter for inspiration and updates
Donate
Find Your Local Chabad Center
Chabad
About Chabad-Lubavitch
About Chabad Lubavitch
The Rebbe
Headquarters
Magazine
Magazine
News
News & Updates
In The Media
Impact
Social and Humanitarian
Social and Humanitarian
Education
Education
Community
Community